Rhaphidophora tetrasperma problems and issues are not a common occurrence. But when they do pop up, they can ruin the look and growth of your houseplant.

The good news is that if you fix the cause of the issue, these plants will recover quickly. And this guide will let you identify what's gone wrong and help you solve the problem. 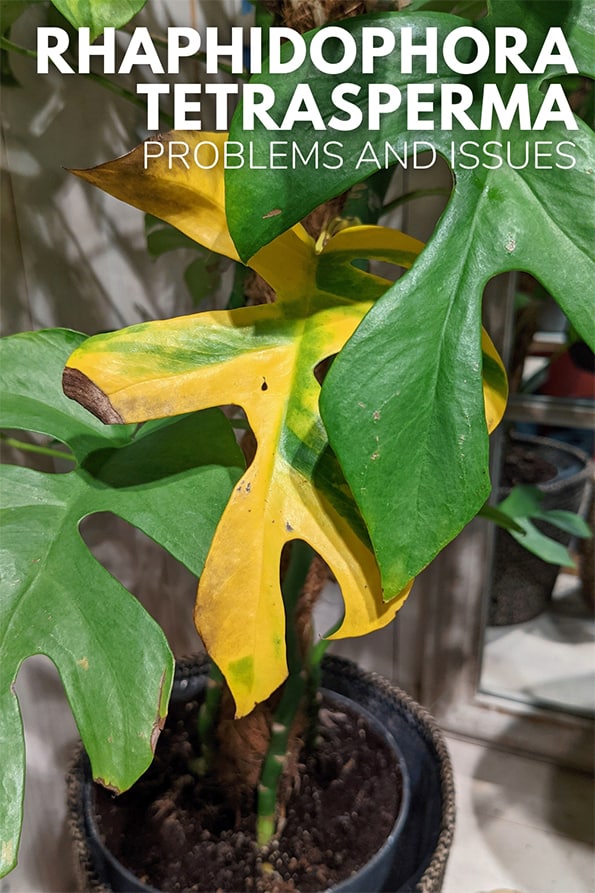 Rhaphidophora tetrasperma is a modern houseplant with the common names of Mini Monstera, Monstera minima and Philodendron Ginny.

If you've had this plant for a while (or if you are new to it), you should definitely spend some time reading my guide on how to care for your Mini Monstera.

It's usually a trouble free plant, so if you're having issues, a refresh in what it needs for care would be a really good idea.

Naturally, if you've found this article, you likely already have issues that need to be solved. So let's get on with sorting that now.

What's wrong with my Rhaphidophora tetrasperma?

Usually, Rhaphidophora tetrasperma leaves are a constant shade of green, but sometimes slight yellowing or markings will appear on the leaves. It could be in small patches or splashes. If the entire leaf is going yellow, that's another issue.

Several things can cause this yellowing. You'll have to do a little investigating to see which of the following causes fits.

Almost every single houseplant will give you yellowing leaves from time to time. This is quite drastic appearance wise and can cause worry. It might not be anything to be concerned about though. 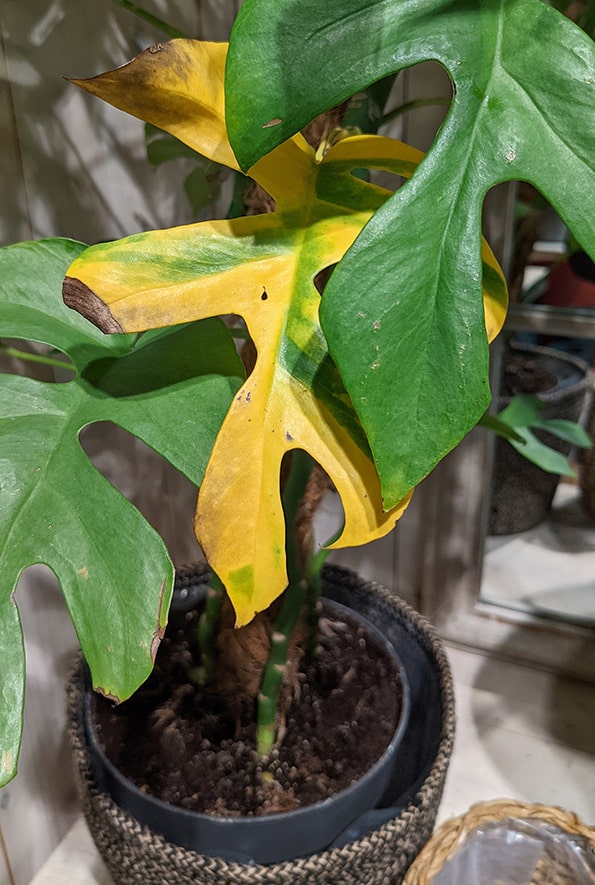 This Mini Monstera has yellowing leaves, which a few issues could have caused.

Several things can cause this type of leaf yellowing. These are the most likely.

Every plant's parent's worst nightmare. When it seems your plant is collapsing, leaves going yellow, mushy stems and a general wilting, it's time to check the roots and look for possible root rot.

This will be the problem if the roots are mushy or black rather than firm and grey or white.

Root rot almost always occurs when the potting medium has been saturated with water for a prolonged period. It's more common in planters without drainage holes but can still happen easily in other circumstances when the plant needs less water, such as during winter.

The water pushes out all of the air, stopping effective root respiration. At the same time, harmful bacteria and fungi are taking over and damaging your plant's roots.

I would say this is unusual, but it's clearly worrying to see. The growth tips go rotten or start to die off and go brown. 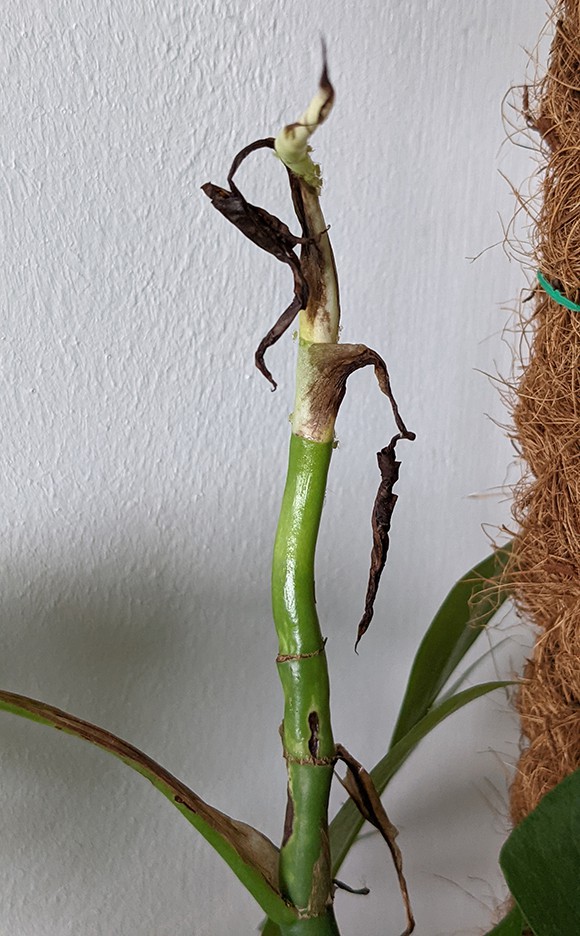 This is more common in the winter but can still occur at any point during the year.

This can be tricky to accurately diagnose as a many factors could be at play. Look through the following and see if anything resonates.

Fortunately for most owners, this is pretty rare and when it does occur, it usually only appears on one or two leaves.

This section covers random brown circles on the leaf, or brown leaf edges as similar things can cause them. 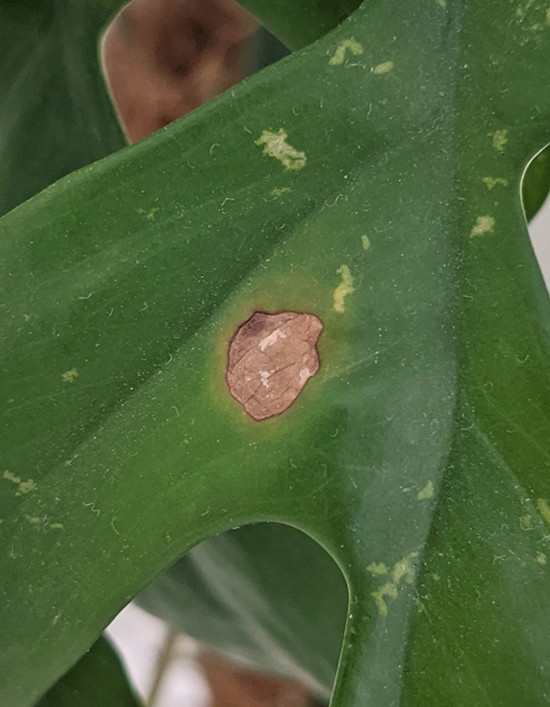 Brown spots with yellow halos can be tricky to diagnose.

There are a couple of things that can cause this, the trick to working out which it could be is to think about how the plant has been cared for in recent weeks.

These are generally fast-growing plants over the growing seasons of Spring and Summer and put out a lot of growth during this period. That's almost six months every year where you can expect a new left every few weeks. So if you're not getting any new growth over this period, something is wrong.

Not growing is usually a cultural or environmental condition. It can normally be resolved pretty easily and one of the four reasons is typically the culprit.

Brand new plants typically produce simple leaves with no holes or fenestrations. Once established, all leaves going forward should be fenestrated with a similar pattern from leaf to leaf.

Over time the leaves being produced get larger and with that comes more and more leaf splits and details. If that's not happening, then somethings wrong.

Rhaphidophora tetrasperma plants are adaptable based on the growing environment, so any change in leaf shape will be caused by an environmental issue.

If this is a problem you're facing, I should probably start by congratulating you for growing your Rhaphidophora tetrasperma so well!

But yes, once your plant has reached the roof of its growing environment, then what? 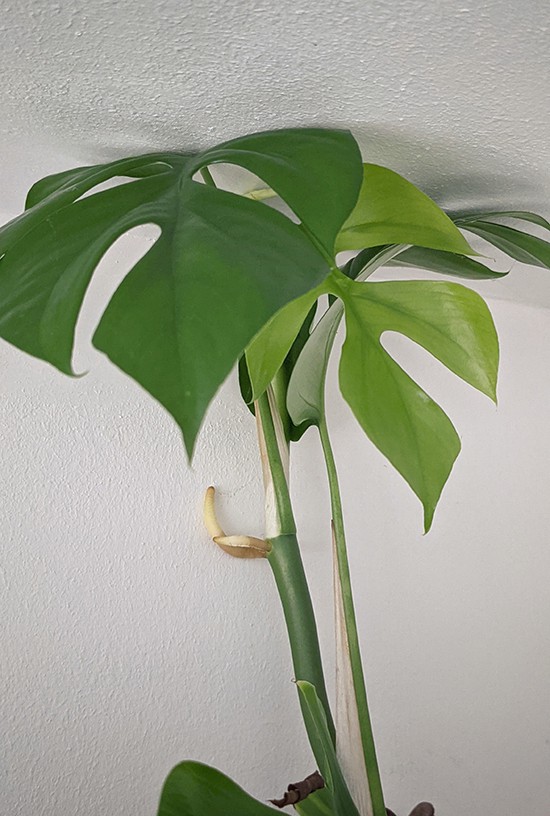 The Mini Monstera is a vining plant from Southern Thailand that will grow to impressive heights. So at some point, those stems are going to reach your ceiling.

Good care and a happy plant are the causes of this "problem".

All my Mini Monstera's, including propagated cuttings, are resistant to many pests. However, Aphids seem very attracted to them and I've had to battle them on two separate occasions. 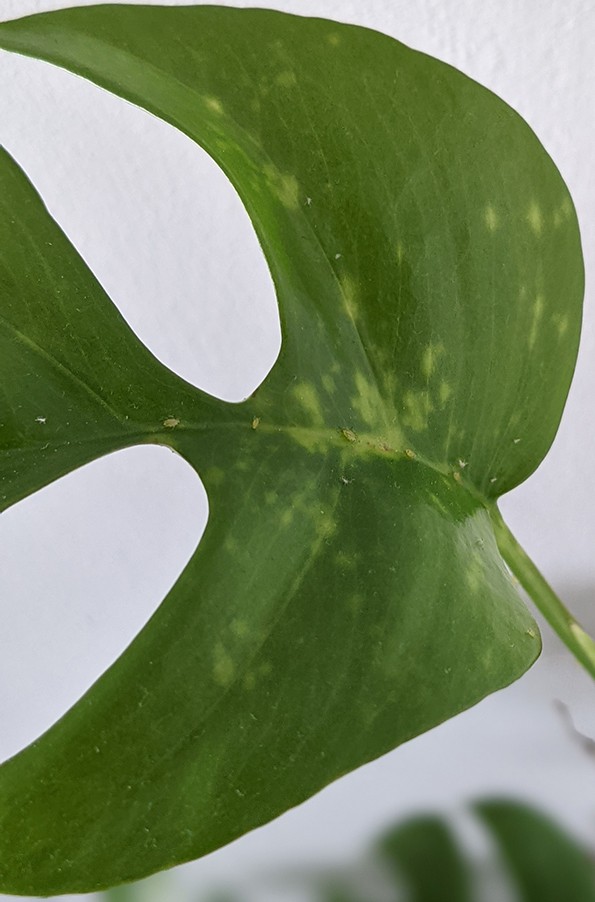 Aphids feeding on a tetrasperma leaf

The causes are varied, from bringing home a new plant that's already infected or having them growing near an open window and one of these insects flying in and setting up a home.

The fact you can see them, makes treatment a bit easier.

These can be prevalent insect pests for some people, especially if you live in a low humidity country or home. Plants contain a suitable home for Spider Mites to live and feed and in time can create a large infestation.

The little insects constantly pierce the leaves and the plant heals by creating small brown dots in the process. Over time this both weakens the plant as well as ruins the look.

Trying to find ways to deter them is the best approach as they can be tricky to get rid of entirely once they've set up home. Here are my easy tips.

Viruses aren't very common for indoor plants, but Mosaic Virus is fairly common in plants that fall in the Araceae family. Such as Monstera's and of course Rhaphidophora plants.

Some owners might think it's a pretty pattern, or they have a rare variegated plant. But often it's just the Mosaic Virus. While it rarely kills plants, it can be unattractive, potentially weaken plants and if there is a subtle carrier, it can spread to other houseplants in your collection. 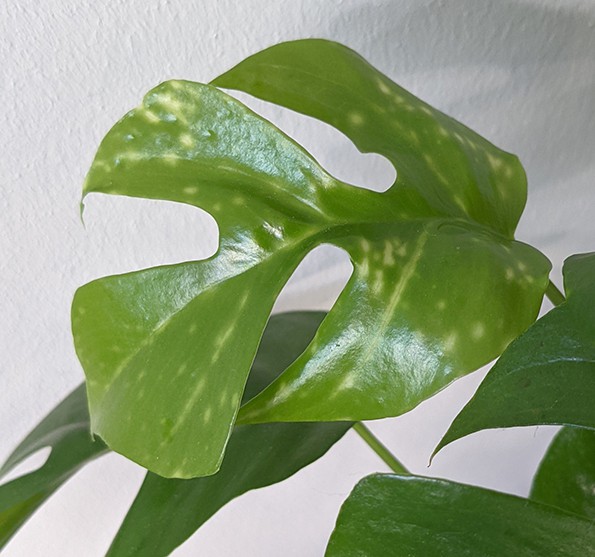 It may look like a nutrient deficiency, but it's actually a virus.

It's normally caused by a pest that pierces leaves and feeds off the plant's sap. Aphids are popular carriers, but any sap sucking insect could theoretically transmit it. This is how to avoid it and deal with the problem.

You can propagate new plants easily through stem cuttings, but many people seem to have issues with the cuttings being slow to take or grow new roots. They're not considered a rapid grower at this stage, but once established they take off. 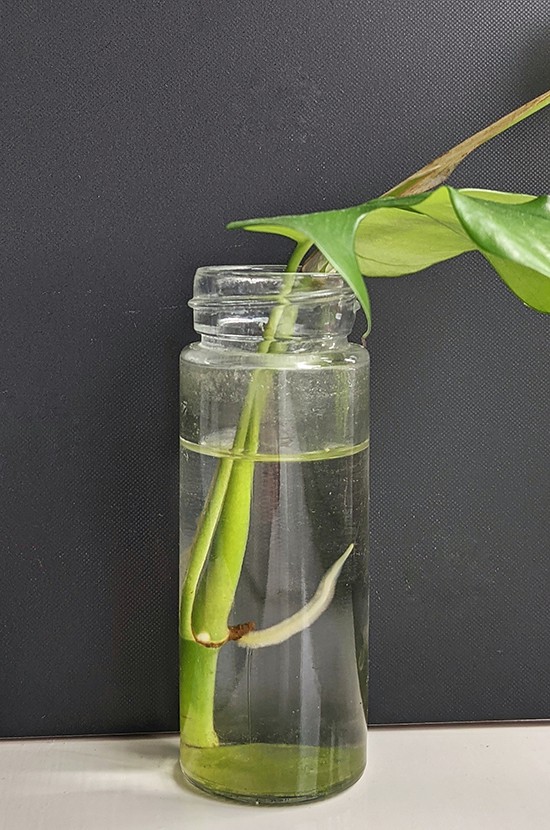 This cutting has finally rooted, but it's taken over a month as the green algae growing shows.

Cuttings usually root pretty well, whether that's in soil or water, but a few things can slow it down.

Why do plants die in waterlogged soil but survive in water?