How to Identify and Control Houseplant Pests

Pest attacks are much more common outdoors in the garden, but even the most experienced houseplant owner will still fall victim to an attack indoors from time to time.

Don't worry though, we've got you covered. We're going to share our experience and knowledge to help you easily sort out pest problems.

Just before we get on, let's quickly point out that sometimes your plant will have a disease rather than a pest problem - in which case you'll need to head over to our disease page. 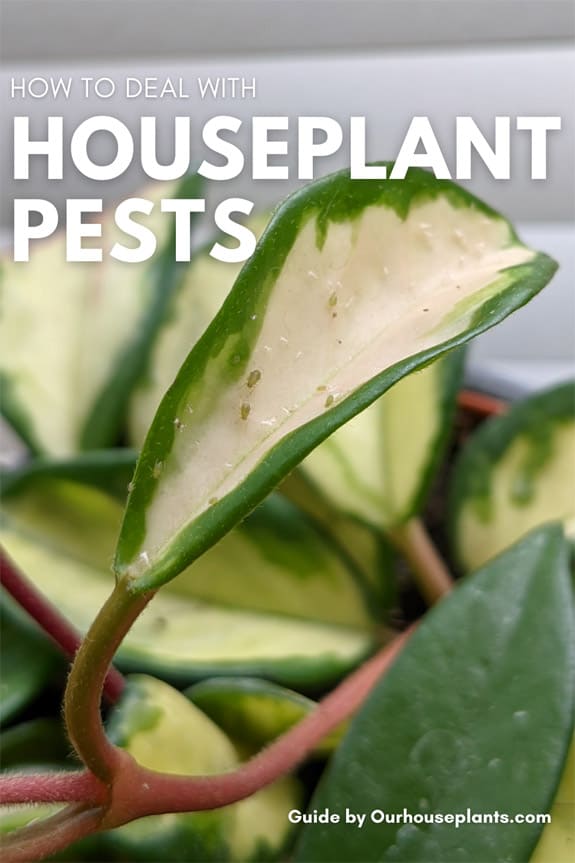 This Hoya is covered in Aphid insects but they can be got rid of quite easily.

Where possible we'd suggest giving the eco-friendly method for pest eradication and control a go first. Because let's face it, none of us need to be spraying strong synthetic chemicals around our home unless we really have to.

Neem Oil
If you want to try a more natural but effective control, you might want to look into using Neem Oil. We've got an article which tells you more and explains how to make your own Homemade Spray.

But the truth is that having plants indoors severely limits or completely removes the option to use truly organic pest control, for example outside Aphids will eventually be eaten by ladybugs but indoors this is unlikely to happen.

So while we detail an organic method, we also list a chemical option where appropriate.

The most common pests are listed below, along with their identifying symptoms and suggested treatments.

If you're having problems with something different, let us know in the comments and we (or other readers) will try and help you out. 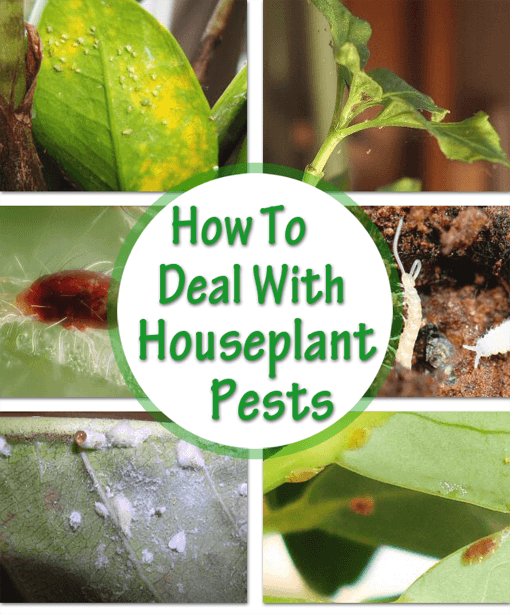 Aphids suck sap usually from the new soft plant growth, the tips, flowers etc, however they can attack any part of the plant. Normally hidden from obvious sight, i.e. under the leaves, they are typically green, but can also be black or grey and arrive in small, but quickly reproducing colonies.

They can be seen easily with the human eye if you look closely. 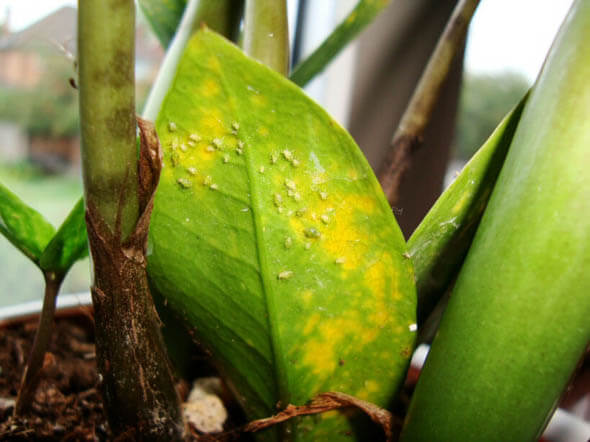 Aphid infestation on a ZZ Plant

They tend to mass together in large numbers making them easy to spot and identify. Look for sticky honeydew deposits on the plant and their white or grey "husks" littering the soil and sticking to the honeydew.

Control is really easy and in most cases doesn't require anything more than warm soapy water although theoretically a chemical treatment, in comparison to others it's very gentle.

Centipedes and Millipedes are normally beneficial insects, especially when living outside in the garden. Centipedes will often hunt smaller insets and other pests. Whereas Millipedes will eat organic matter like dropped leaves which helps break it down and helps turn the matter into useful nutrients for growing plants. But inside they can be worrying and disturbing to see.

Sometimes described as "worms with legs" or "worm bugs" it's not too uncommon to run across these critters from time to time. Very occasionally you might get an "infestation" as shown below. 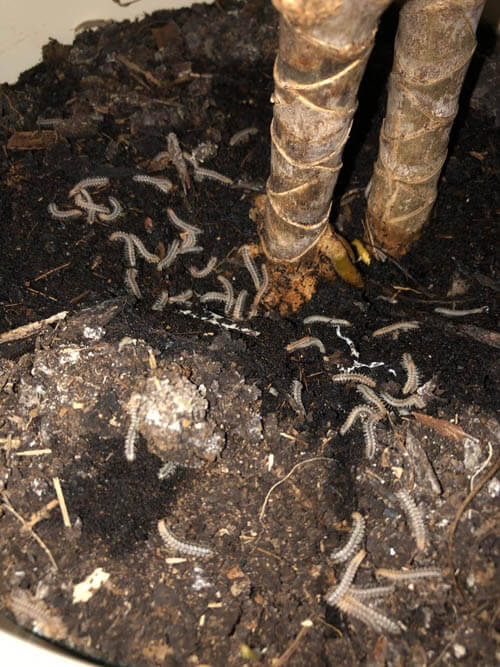 They rarely do any damage to your plants, so you're only likely to notice their presence when you literally spot them with your eyes as they're crawling about. Normally they're more active after you disturb the soil, such as when you water it.

Mealybugs are related to Scale insects and cause damage by sucking sap from plants. They are reasonably large as far as pests go, resembling furry white woodlice. They cluster together and at first glance, you might think you are looking at cotton wool.

If left untreated their damage will cause the leaves of the plant to yellow and eventually drop off. 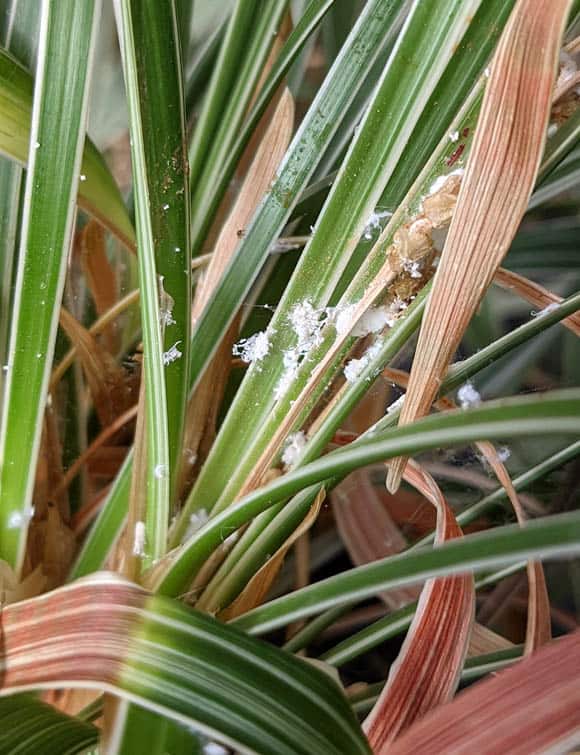 Mealybugs attacking the underside of a plant leaf.

It's very common to be able to spot the insects before you start noticing symptoms on the plant, colonies of mealybugs tend to group on the undersides of leaves and in the leaf joints of plants. The plant will show you it is infested by wilting and generally looking dehydrated, it may be losing leaves quite rapidly. Also, look for sticky honeydew residue.

Of all the house plant pests you can come across the Red Spider Mite is arguably the most feared. The damage caused isn't necessarily the worst, but their prevalence and difficultly in removing can be quite trying and frustrating.

Like their name suggests they're arachnids and therefore related to normal spiders, however although they spin webs all over your plants they don't feed on flies, instead they eat the liquids found within plant leaves.

The webbing is used to protect the colony and basically open up quick access "roads" to different parts of the plant, if allowed to get out of hand you will have a mini-metropolis on your hands. 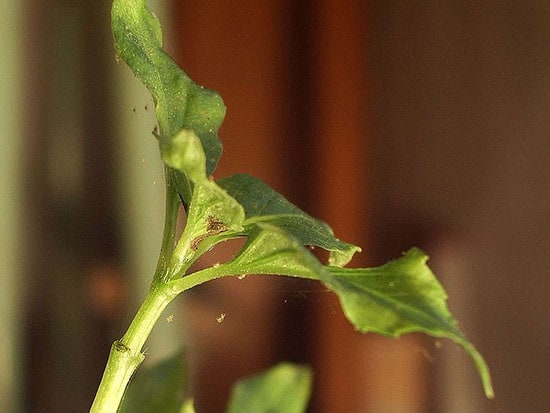 The sticky webbing is one of the most obvious signs these insects have set up home. However the most common symptom on the plant is mottled leaves with lots of little brown dots.

This is caused by the spiders piercing the leaf cells with their mouthparts which then causes the cells they've pierced to die and in turn creates this brown speckling effect.

Scale is a tricky pest to identify and can be difficult to eradicate. The insects have a hard outer brown shell that locks them in place a bit like barnacles on beach rocks at low tide. 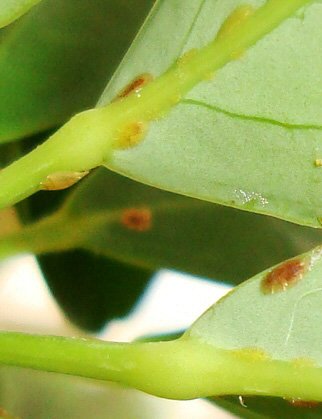 Quite simply, sticky honeydew everywhere. If the plant is near a window it will be filthy with it, if near fabric the honeydew will eventually turn black and create almost "sooty" like mould. Look closely at the underside of the leaves or on the stems and you will see them as small round or oblong brown discs.

They're only formidable because of their protective shield, if you can get rid of that then you've almost won the battle already. Although it's rare to eradicate them in one go. Their offspring are very small and mobile therefore easy to miss, in a few weeks they will set up home where their parents once lived.

Be prepared to treat the plant several times before they go completely.

There is nothing worse than having small annoying files zipping around. You bat them away to start with, but with their constant distraction you seek out where they are coming from and eventually find a small colony hovering or running around the base of your houseplant(s).

Without doubt, this is the most common pest in our house. Fortunately although also very common for a lot of other owners they tend not to harm indoor plants and are therefore more of a nuisance than anything. 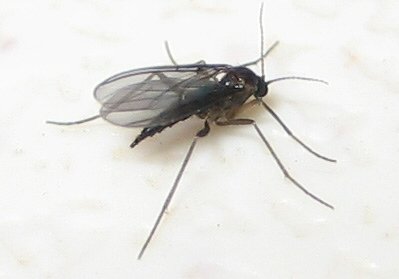 Spotting small black flies around 2mm long either flying around near the plant, or running over the soil surface. The larvae are small worm-like creatures, up to 1cm long and thin, it's hard to spot them though as they tend to exist just under the soil surface.

In 95% of cases, you'll only have Slug or Snail problems on plants that you choose to put outside in the warmer months of the year, they can still set up shop in your home too though. They are quite a big pest both in size and with the amount of damage they do in a short space of time, however they're also the simplest to deal with.

Slugs and Snails can eat and damage large sections of plants in a single night.

Identification is easy. The leaves will be drastically damaged, large holes, or entire leaves stripped clean.

When morning comes they'll already be well hidden away after feasting on your beloved plants, But they will sometimes leave a slimy trail around the area, which is the smoking gun as to what the culprits are.

Springtails are small, white or grey insects that live off the decaying organic matter found in soils. They are small (although can be seen easily with the human eye as they stand out against the dark compost) and best resemble fleas, they aren't really pests at all as they do no damage.

However their presence often attracts attention because when you water and are consequently paying more attention to the plant than usual, the water triggers the Springtails to go wild with movement and thereby alerting you to their existence. 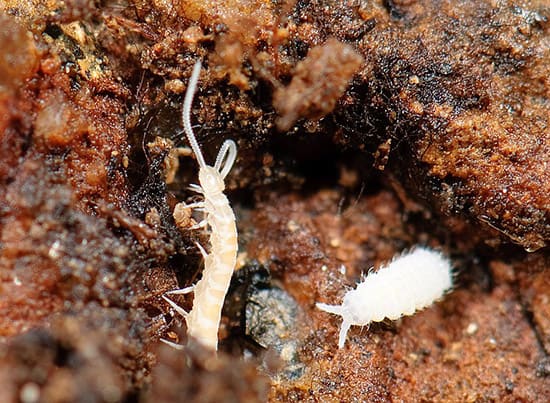 Springtails living on the soil surface of a houseplant - Photo by Marshal Hedin.

When you water the plant and it hits the soil, you'll notice small white flea like insects jumping or moving around.

As above there isn't a need for a "treatment", but they can be frustrating if you want to get rid.

Saving the worst to last perhaps. In our experience Thrips or "Thunder Flies" are the stuff of nightmares when it comes to houseplant pests. They can significantly damage and disfigure plant foliage in a short space of time and if left untreated will kill your plant.

A mild infestation completely took out two Monstera plants and a large Palour palm before we even knew what was happening.

Only a few houseplants are truly resistant (or unattractive to them) and Thrips will spread around your home to other plants if given the opportunity.

They're also difficult to get rid of unless you're persistent. Treat them seriously and eradicate them if possible. If you've tried the treatments below and still think you're losing the battle, throw your plant away. Often it's not worth the risk of them spreading to the others in your collection. Hoover, and thoroughly clean around the area the plant was growing before you put a replacement there. 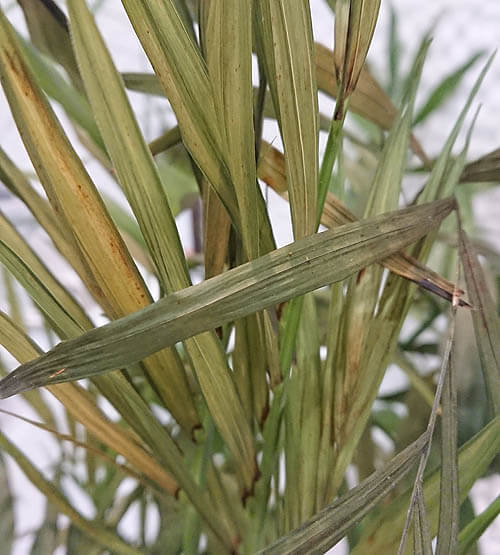 Thrips can ravage a houseplant quickly. This once used to be a handsome Parlour Palm. It's now sitting on top of the compost heap.

In the photo above you can just see two or three of them towards the center-right of the picture. Sort of look like dust don't they? They hardly seem a threat at all. Don't underestimate them is my advice.

It's far more common to notice mottling, streaking, browning or yellowing on the leaves of your houseplant. It's easy to think the damage is some kind of watering problem. When overwatered, the leaves on most houseplants will quickly go a solid bright yellow. So if you have something in between do spend five minutes just checking the leaves to make sure it's not Thrips (or something else).