About the Sweetheart Valentine Hoya

There are a few Hoya's out there which make ideal houseplants, Hoya kerrii or the Sweetheart Plant is one of them. It's become increasingly popular in recent years but you might still struggle to find information or care tips about it. 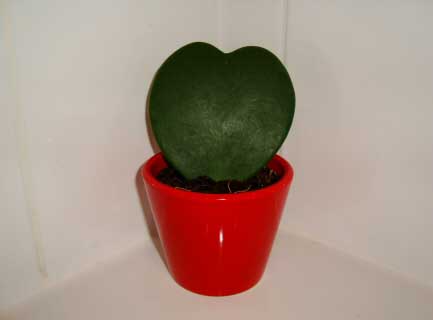 We have to be fair here and tell you right from the start, that this plant is a lot like the Lucky Bamboo because most of its recent popularity is based on er, well a fad.

Being quite easy to propagate and therefore making it rather cheap to grow and sell on, along with its unusual and quirky "heart" shape leaves, makes it perfect for the marketers to work their magic. This is because it appeals to anyone looking for something a bit odd or for that special novelty gift to give their plant enthusiast friend or lover a chuckle.

All is not lost however. It's easy to spin this negativity around; because this is one of the easier houseplants to look after and care for, letting you get away with only occasional attention. In fact it would probably tolerate only one watering a month it's that hardy. 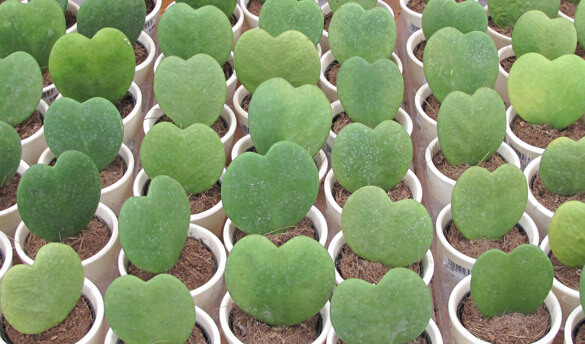 Also if you have that sole leaf long enough and treat it respectfully (or cheat and buy a more mature plant with several leaves already on the go) you'll end up with something much more beautiful and striking. This is because a larger plant with multiple unusual shaped leaves, as you might be able to guess, looks like a bush of green hearts! Very interesting and possibly very romantic.

For the right person this is the perfect Valentine's gift to give or receive and this is the reason this plant sometimes goes by the name Valentine Hoya.

The flowers, like most Hoya's, are stunning as the contrast in the flowering parts are really bold (check out the photos to see what we mean). The all green variety tends to grow more quickly (although it's still slow by most houseplant standards) and it's arguably more hardy, but it also comes in a pretty variegated variety (see gallery).

This plant will need a reasonably light room in order to actually grow, although it will still get by even if you pick a shadier spot, very dark places need to be avoided though. Sunlight is acceptable too, so in reality you could position it almost anywhere in your home or office.

With its succulent qualities it's quite adapt at storing water for longish periods of time between waterings. This makes it a hardy and undemanding plant for the most part, of course only providing basic care will result in a surviving rather than thriving plant, so where possible wait until the soil has dried out a little and then water again.

This means don't wait long periods between watering's just because you can. Do be careful not to overdo it though! The soil should never be saturated or boggy as this will lead to rotting. Take special care if the pot it comes in has no drainage holes.

The thick Sweetheart Plant succulent like leaves aren't bothered about humidity levels so you needn't be either. 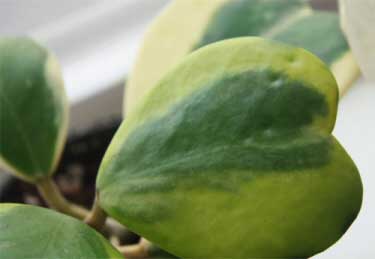 Only a little feeding is required if the plant is small or exists as a single leaf. Twice a year at most. If you've an older plant or that single leaf is throwing out new shoots you can feed a little more. Even then though you don't need to be doing it more than four times a year. The Sweetheart Plant is not a very heavy feeder.

Most temperatures you find indoors are fine. Growth will slow or stop if things get cool so you will need a range of between 18°C - 27°C / 65°F - 80°F for optimal growing temperatures.

This subject triggers debate amongst Hoya owners. There are several general schools of thought which boil down to the following "rules" -

So breaking all of this down into practical examples that should make sense:

If you decide to propagate this plant then the good news is that it's very easy. Copy the method for propagating the ZZ Plant. The bad news is that just like the ZZ Plant it can take several months (or much longer) before the new plants show signs of new growth.

If the leaves haven't gone yellow or started to wrinkle and shrivel up after a month or so then the "cutting" has probably "taken". Which means you now have the common form of Hoya kerrii that you can buy from many shops.

In the grand scheme of things if you want a mature plant with lots of leaves or one capable of flowering quickly, propagation isn't the best way to get there. Instead you're going to have to dig deep and go out and buy one.

Growth in the early days of a young plant is often slow to get going and when it does eventually start - it's still slow! Once it's established however with a good root system "vines" will shoot out quite quickly on which new leaves are formed.

Be warned - if you only have a sole single leaf with no stem then there is a very real chance your plant may stay like that forever. Hoya kerrii leaves growing by themselves only have a small chance of producing new shoots, and this would normally be after several years. If you do happen to have a non grower then the speed of growth will obviously be zero.

The most common indoor form these days is a miniature plant, but with age and good conditions your Hoya will clamber over its surroundings and cover quite a large space.

On older plants you can expect a wonderful annual display. Blooms often appear in Summer, with numerous small flowers in a star shaped pattern. They contrast in colours so really stand out and draw the eye. It's also common for a delicate, but at the same time, powerful perfume to waft from the flowers. 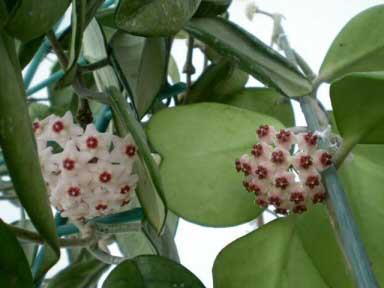 Hoya leaves don't taste at all nice, but they aren't toxic to people, or cats and dogs.

Assuming you've either a young plant with several leaves or a mature one (anyone with just a one leaf plant should bookmark this page and return in a year or two!) chances are you'll have noticed the vines that come from deep within the plant.

Mature vines are grey and often look and feel " woody". Most of this stiffness is a result of lignin designed to support a heavy climbing plant (out in their natural habitat they tend to grow up and up). These vines thicken and stiffen up very quickly eventually making training and bending almost impossible. 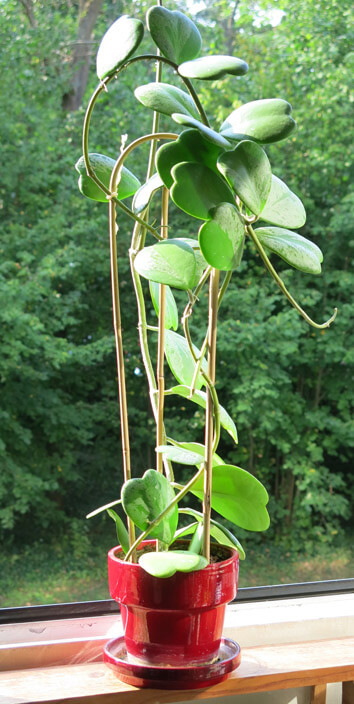 The obvious solution is to get the vines trained and into position, perhaps over a small pot trellis, when they're still soft and growing so you have the exact framework you want from the get go.

But what if you've neglected to train the plant when it was young or you've inherited an older specimen?

Well you do still have a limited amount of control in regards to training. If the plant becomes very dehydrated, i.e. it hasn't been watered for some time the vines will lose a small amount of stiffness and will have a degree of flex. It's not much though and careless bending will cause damage, but you can attempt to shape the plant if you're not happy with it's current appearance.

Caused by over watering or exposure to very humid conditions for a prolonged period. Exposure to frost or very cold temperatures can also cause rotting of your Hoya.

This is often a sign you have been underwatering. If you're sure you've been watering correctly have a look at the roots, it's possible you've over done it in the past and they will all have rotten away, i.e. root rot.

Make sure you have a mature plant which is at least a couple of years old, as you won't get flowers on a young one. Don't expect flowers on single leaf plants or plant's which have been given poor conditions to cope with (its energy is instead being spent surviving!).

The Sweetheart Plant often grows slowly. We discuss this above, but basically the only remedy here is patience or to buy a plant with several established leaves already.

Have a read of our "Anything Else" section which discusses training.

The variegated variety will often produce new vines which have completely green leaves. This is usual in the world of plants, it's generally thought that an all green leaf is more efficient for a plant when it comes to photosynthesis than one with variegated leaves.

The variegated leaf parts don't contain much, if any, chlorophyll, so photosynthesis can't take place. It might look nice to the human eye, but from the plant's perspective those sections of the leaf are a waste for the plant to maintain, so reverting back to all green leaves is normal. You can either accept the mishmash of colour, or cut off any new growth which has reverted.