How to Know if You're Overwatering Your Houseplants?

"Am I Overwatering My Houseplant?"

Overwatering indoor plants is easily done. So yes, at some point, you've almost certainly been guilty of it. Even me.

Giving too much water in one go or not letting enough time pass before you've watered your houseplant again are both forms of overwatering. And if your plant looks anything like the one in the photo below, then yes, you're definitely overdoing it. 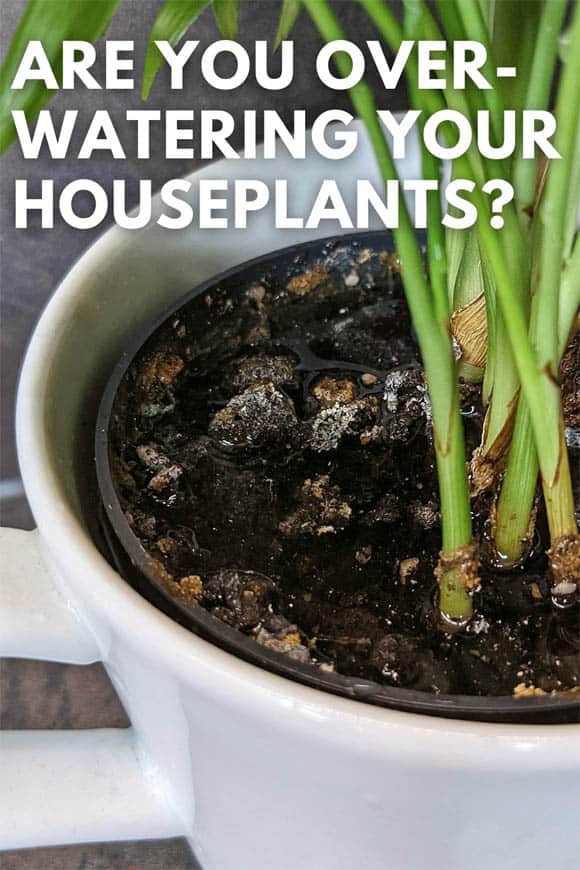 A drowning plant (look at all that water on the top of the soil)!

Nobody is perfect when it comes to watering, and thankfully we don't need to be, because the majority of houseplants are pretty resilient to little slip ups every now and again.

That said, very few plants can deal with high volumes of water over a long period. In fact, overwatering is the biggest reason plant parents end up throwing theirs away.

Prevention is better than cure. Free draining potting mixes and drainage holes at the bottom of the pot or container will mean less water sitting around the plant's roots.

Not using a fixed watering schedule will go a long way to prevent overwatering from happening. Throw the set schedule out of the window and work with your plants. Give them more if more is needed and less if the opposite is true.

How do you know when it's time to water? The best way is to look or feel the soil. If it's still damp from the last time you provided it with a drink, wait a few days and then test again.

If this still sounds like too much work, then a moisture meter could be a good tool for you. You stick it into the potting mix and it will tell you the moisture level. No need to get your fingers dirty and it will provide you with more scientific and accurate measurements. Here's an example one on Amazon. (Affiliate link).

Mistakes will still happen though, that's the life of a plant parent. But if you spot the warning signs, disaster can be avoided.

So what are the symptoms of overwatering? Well, read on and let's save some lives!

If the soil around your plant is very saturated with water and you can either see it pooling on the soil surface or you can pour it out by turning the pot sideways, it's had too much.

There must be air pockets in the potting mix to give the roots room to breathe. If the entire mix is saturated with water there will be no air and that's the reason you're having problems.

This is why you'll find pots with drainage holes and "open and airy" potting soils to be the most recommended way to grow houseplants. They help to create a good balance between air and water by letting excess moisture drain, cultivating healthy roots and overall good plant health in the process.

It will depend on the type of plant, but both succulents and cacti will quickly rot and soggy-looking patches will appear that feel like mush when touched.

I feel rotting stems are one of the biggest indicators you have an overwatered plant on your hands, simply because it's so striking and hard to miss. It can also be destructive. 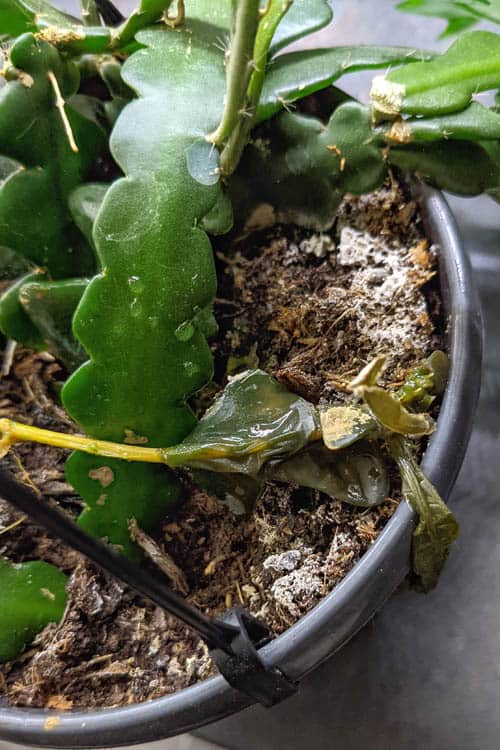 You can't reverse the damage once the stems go rotten like this. Just carefully remove the affected areas.

How to Resolve
The fungus is essentially harmless and only lives on the soil's surface, so you could still have a happy plant overall.

To remove the fungus, you can gently scrape or rake it away with a small stick or end of a pencil. To stop it coming back, let the soil surface dry out more often and, if possible, try to increase the ventilation around the plant.

The photo above shows the regular healthy brown soil and white crusty-like material on the soil surface.

This is a type of common fungus that grows when there is a constantly moist soil surface that's not allowed to dry out. Combine this with poor ventilation and lower temperatures and it thrives. It's more common over Winter but can occur at time of the year.

As well as this white fungus you may also get small toadstools, or even a little green slime (yuck!). These things only live on the soil surface or just below, so it's easy to fix. Going forward wait longer between waterings. 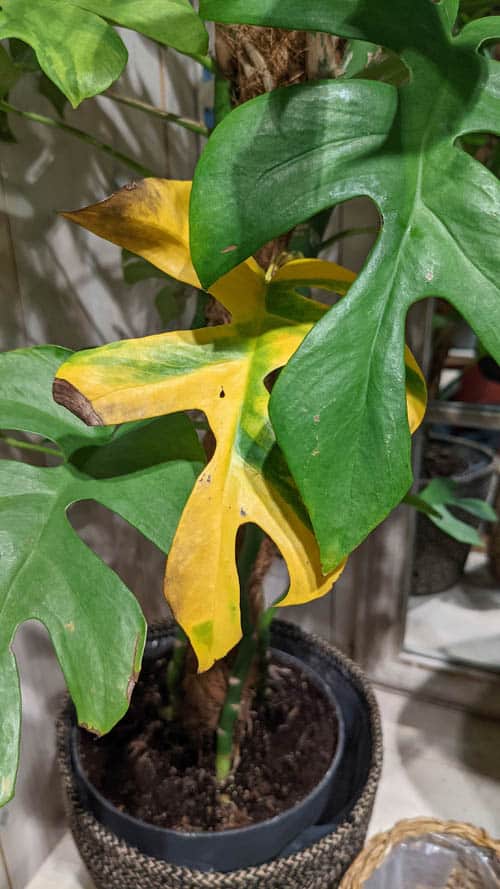 The leaves on this Rhaphidophora Tetrasperma are turning yellow from too much water.

Natural aging can cause leaves to go yellow. However if there are a lot of leaves doing this or you notice it's happening alongside any of the other signs mentioned on this page, overwatering could be the cause.

Dry crispy brown or black spots at the edges of leaves are a common sign of underwatering or sun damage.

But if the marks appear randomly on the leaf surrounded by normal healthy looking tissue it's likely caused by the soil moisture level being too high. It also tends to be more common on new growth rather than say further down on the lower leaves.

The final clue is if the marks or blemishes start off feeling "soft", or even a little moist. You might be able to fold or even winkle the leaf a little without it tearing. If this is happening then too much water in the last few weeks is typically the cause. 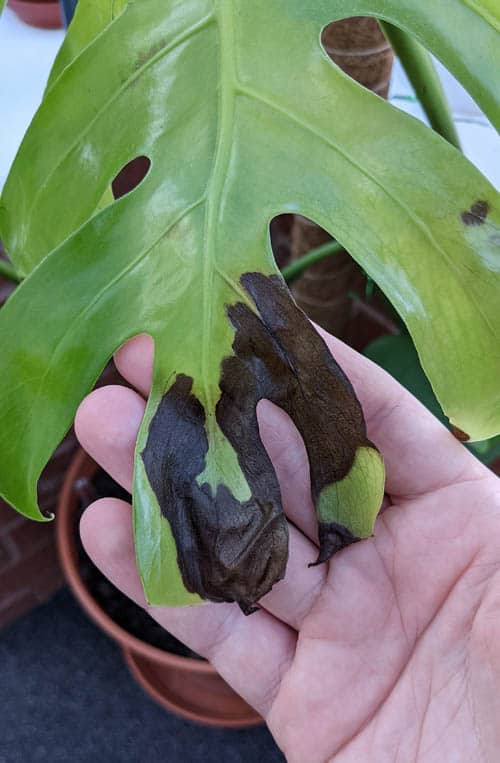 This Monstera has black and dark brown markings - clear signs of being overwatered recently.

Gather the Evidence
It might not come across in the photo above, but the Monstera leaf in my hand is very slack. I already guessed it had been overwatered because of the discolored marks, but the limp leaves provided extra confirmation this was the reason.

In severe cases some houseplants will react to heavy overwatering by going limp and wilting quite dramatically. Confusingly this can also be a sign of not giving enough water!

It's easy to work out what's happening though, as the wilted look will only occur if there is currently too much water around the roots. You just need to look or feel the soil to find out which one it is.

Pests aren't normally good for anything when it comes to indoor plants, but Fungus Gnats (sometimes called Sciarid Flies) will only appear when the growing medium is too damp for prolonged periods.

They're attracted to persistent moisture and feeding on any rotting organic matter on the soil surface. They dislike dry soil, so if you see these annoying flies buzzing around, then their presence can be a strong indication your watering technique needs a little refinement.

The good news is that they're not harmful to your plants, but if you want to get rid of them, we've got you covered in our dealing with houseplant pests article.

This is our final indicator that you're overwatering your houseplants. If you suspect there is a watering problem, gently removing your plant from its pot and having a look at the roots is the easiest way to get confirmation one way or another. 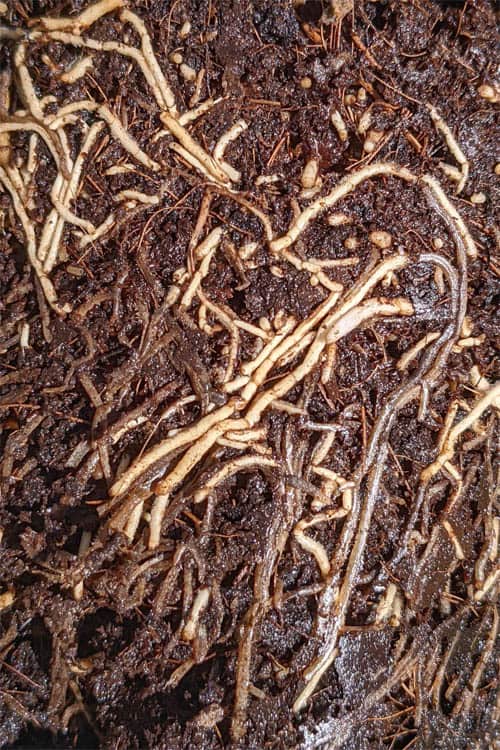 Root rot is fairly common with extreme or prolonged watering issues. If the roots are mushy, black, falling apart, or in any way unhealthy, overwatering is often the reason.

Problems with your plant above the surface will usually show up after the root ball and root system below the surface has been affected. So it might not be as apparent as the other signs and although it can be harder to remove larger plants from their pots, it can be the deciding factor and worth the effort to check.

50 House Plants That Clean The Air