"Can I use normal lights to grow plants indoors?"

Yes, you can use most regular light bulbs to help grow your indoor plants. But they're nowhere near the best source of light for plant growth and using them is unlikely to produce a healthy houseplant in the long term.

So, why don't I recommend using normal light bulbs and just how effective are they compared to indoor grow lights?

The rest of this article goes into more detail, answers these questions and I'll hopefully give you a good understanding of the topic along the way. 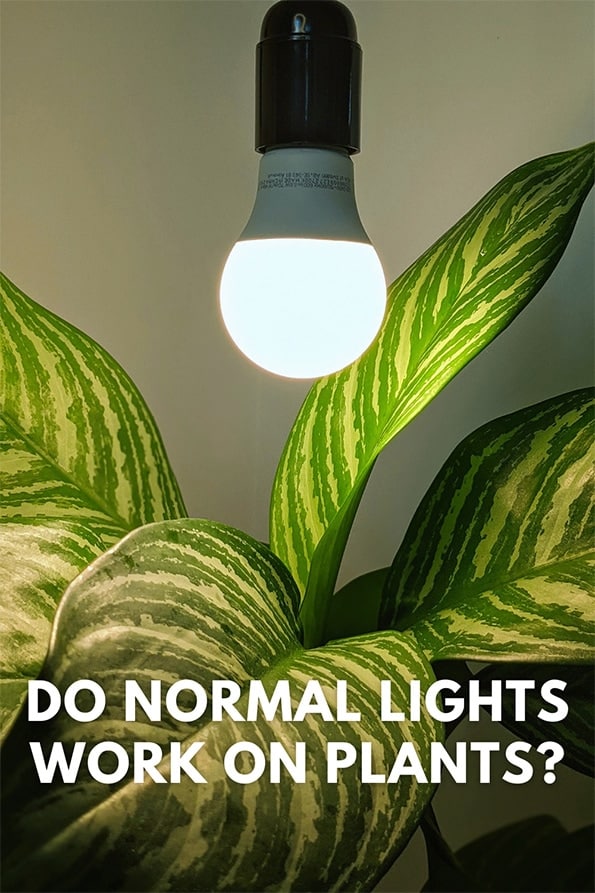 Full spectrum artificial light can give out enough light to fuel your plant's growth, but is it worthwhile?

Right from the start, I'm going to tell you that using regular light bulbs when growing plants indoors will never be as effective as finding good natural light sources in your home.

Further reading -
Complete Guide to Indoor Light and Your Plants

That said, some sources of artificial light can strike a good compromise for houseplants you have growing in lower lit areas and can't be moved into a location with natural sunlight.

The Science of Light

The science is complicated, and you know us; we like to keep it simple where possible. Use this article to get an understanding and I'll link to some more detailed explanations later if you decide you want more.

Electromagnetic Radiation is energy made up of photons that have measurable wavelengths. Some of this energy is invisible to the human eye, such as radio waves or ultraviolet light.

But if this radiation has a wavelength between 380 to 750 nanometers (nm) most people can see it as visible light that equates to the colors the human eye can see.

The diagram below shows you this range and how it looks as you move from 380nm up to 750nm.

Plants use the photons in visible light for photosynthesis, which in turn powers the plant and allows it to grow. Much like food sustains us.

There are cells within leaves called Chlorophyll that absorb specific visible light wavelengths. There are two types, Chlorophyll "A," which mainly absorbs violet-blue and orange-red light, and Chlorophyll "B," which primarily absorbs blue light. The diagram below shows you how this looks in practice. 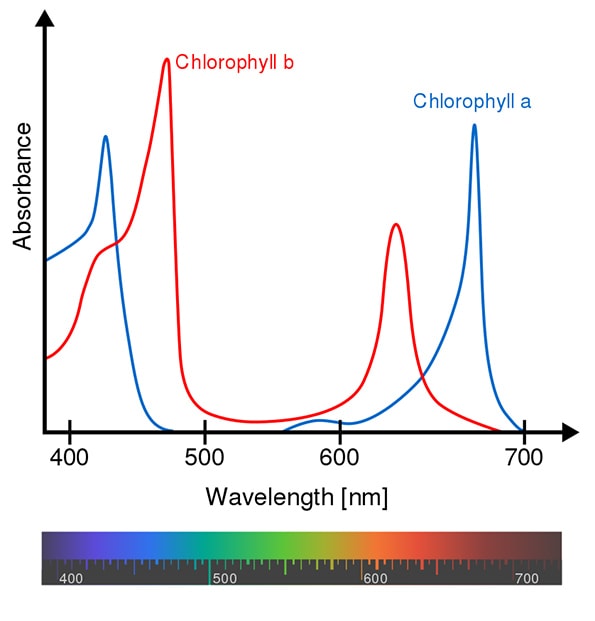 Plants absorb blue light and red light more than any other color. - Diagram by Daniele Pugliesi and M0tty

Although the different types of chlorophyll absorb more at certain wavelengths (mainly blues or reds), you can see from the above diagram that between them, some is absorbed at every nanometer. This range is known as the Photosynthetic Active Radiation or PAR.

Why is this important? Well, it means whatever supplementary light source you're providing to your houseplants must produce all these wavelengths to be effective. The good news here, is that most modern bulbs will have this range. However, some are better for your plants than others.

What type of bulb is best for growing plants?

You may have spare bulbs and a light fixture or two ready to be repurposed for your indoor gardening efforts. But did you know some bulbs are better than others at helping to grow plants? Let's take a quick look from worst to best and why.

These bulbs were used almost everywhere 30 years ago, but they're now increasingly rare. Incandescent lights are not efficient and generate a lot of heat when used, meaning you have to keep them further away from your plant's foliage to prevent it from burning.

Additionally most produce very little blue light (which I've already shown above is necessary for a healthy houseplant).

These are smaller and can be brighter than incandescent bulbs, but they have similar drawbacks. Expensive to run, heat generators and poor amounts of blue wavelengths.

Sometimes known as T5 bulbs, these are a step up from the last two. They have a long lifespan and don't generate as much heat but still produce a high amount of light using less energy.

However, fluorescent bulbs are often an awkward shape, only fitting special tube fixtures, and are more expensive, and although they give off blue light, most give less red.

Light Emitting Diode or LEDs are currently the most commonly sold bulb in many parts of the world. Regular LEDs are very energy efficient, come in almost all shapes and sizes, and give out little heat but can still provide levels of full spectrum light for plant growing. 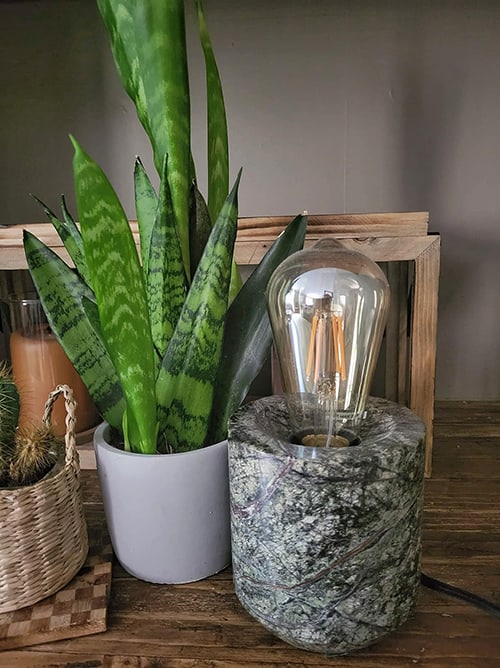 A table lamp like this could give this Snake Plant hours of bright light.

These are specialist bulbs that can come in most forms mentioned above, with Compact fluorescent lamps (CFLs) and LED lighting being the most popular. LED grow lights have the edge though, because they're easier to make and can come in any shape or size that's needed. They could be a bulb design or laid out as strips.

They'll often give off more light, and be positioned in a way to direct light in a certain direction rather than "all around" an area. They'll also be fine tuned to provide a full spectrum of light but ideally with more blue and red wavelengths, which is important to get right for proper growth.

Regular LEDs will work... But not well and here's why

So I've just told you that regular LEDs and Grow lights are the best bulbs to grow plants. But now I'm saying regular LEDs won't be that effective? Don't worry, I'll make it make sense.

Most normal light bulbs used in homes are designed to emit light, primarily for us to be able to see our surroundings. Generally speaking, they mimic the color we see around us during the day, essentially "white light".

The diodes don't produce white light directly. Instead, LED manufacturers do this by converting blue light using a phosphor coating over the diodes, or by mixing the intensities of the red, blue and green chips to create "white".

So here's why I don't recommend using everyday LED lights for indoor plants.

Here's a little experiment to demonstrate my second point. It's not properly scientific at all, but if you repeated it you should be able to draw similar conclusions.

To work out how powerful a bulb is for growing plants, we can establish what the Photosynthetic Photon Flux Density (PPFD) is. This is when you measure the number of photons in the 400- to 700-nm waveband that fall on a given surface each second. In this case a plant's foliage.

Using a basic PPFD recorder from an App Store, I held it about a foot underneath one of three light sources. The light from a west-facing window on a semi-sunny day, a standard regular LED light bulb and a specific LED grow light.

I'm measuring PPFD from a west-facing window (small window and no direct sunlight).

The light from the window was indirect normal daylight. Had the sun been shining into the window, that reading would have been well in excess of 1,000 or more. 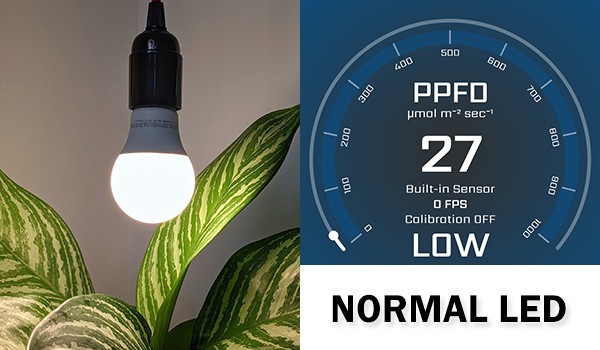 Measuring PPFD with an everyday light bulb hanging from a pendant light fitting.

Based on what I've been saying in this article, it should be no surprise that the normal LED performed the worst in terms of PPFD μmol/s output.

It's just a regular bulb, not particularly powerful, and it's teardrop-shaped to give out uniform and omnidirectional light, which is what we want from a normal bulb in a normal light fitting.

Light travels in straight lines, so some of the light being given out towards the neck of the bulb, will travel upwards so it won't even reach the plant below. A spotlight that has a flat surface would direct it downwards properly, but spotlights for lamps or general light fittings are unusual for typical usage in most homes (and I didn't have one to test!). 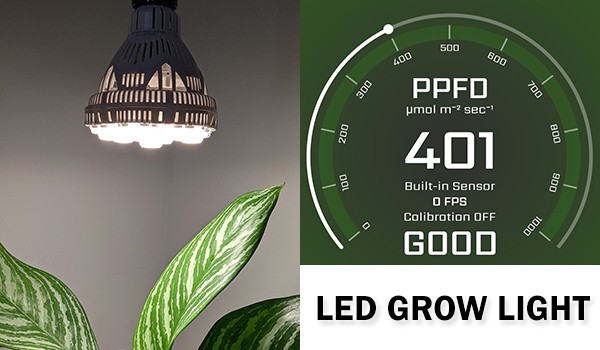 The light output from this grow bulb is high compared to the previous two types of lights.

The grow light wins hands down, even doing better than natural indirect light from a window. That might seem unexpected, but grow lights are specifically designed to direct as much light as possible onto plants nearby. If you live in a part of the world with a changeable climate, they're also more reliable than the sun.

You can see this bulb has a flat edge, so all that light hits the plant in the perfect spot. Natural indirect daylight would enter vertical/upright windows at an angle, so some of that intense energy is lost.

The grow light also draws considerably more power than the conventional LED bulb and has more chips. It's more powerful, brighter and generally a better tool for its purpose in all ways.

Further reading -
Use our calculator to find out what a grow light costs to run?

Indoor gardening can be a dark place, and extra lights have the potential to really aid in growing healthy plants in your care, but it depends on the type of light you're using.

You can use regular lights, but the effects, in the long run, are unlikely to be as good as using one that's designed for the needs of the plant. 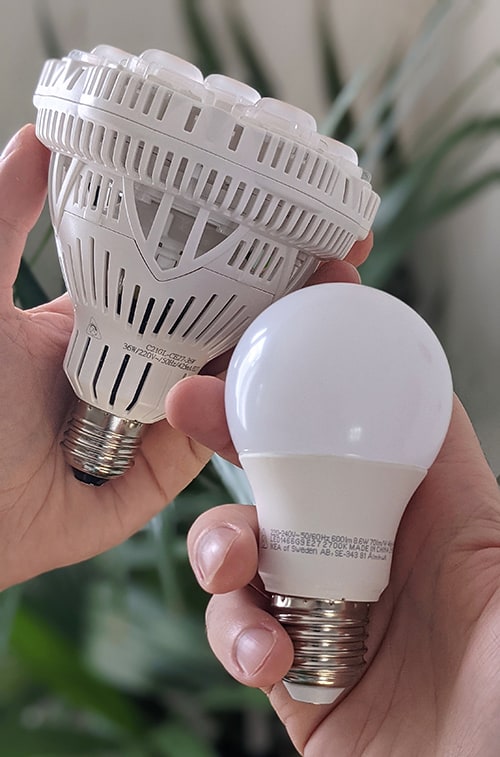 A grow light on the left and a regular LED on the right. Both can be used as "plant lights", but it's the grow light that would give the best results.

The initial cost of a specialist grow light can be very expensive, but if you only want to supplement a few of your plants' light needs, you can get a high-quality basic bulb for well under $40.

What's the Best way to use a Grow Light for indoor growing houseplants?
We'll be answering this in a separate help guide soon.

The one I use and is shown in the photo above is a SANSI. The company does several bulbs with various power outputs and different home setups.

I'll link to their selection on Amazon in case you want to take a look. (Although it's an affiliate link, we're not being sponsored by SANSI). I just like the variety and how they tell you what the bulbs are capable of in regards to output and the detail of the wavelengths. You can always use them as a starting point and compare with other brands.

In summary, normal lights can be used to grow healthy plants indoors where there is a lack of light, but they may not be the best option because their effectiveness is often minimal. Although from your houseplant's point of view, the saying "It's better than nothing" does ring true here.

How to Clean Plants the Right Way

How much does a Grow Light cost to run?