"Does noise help plants to grow?"

You might have heard that houseplants like music or believe that talking to them can help them to grow better.

Is this just an urban legend, or is there some truth to the idea that plants can hear? I decided to investigate further and establish if sound can help houseplants. This is what I learned. 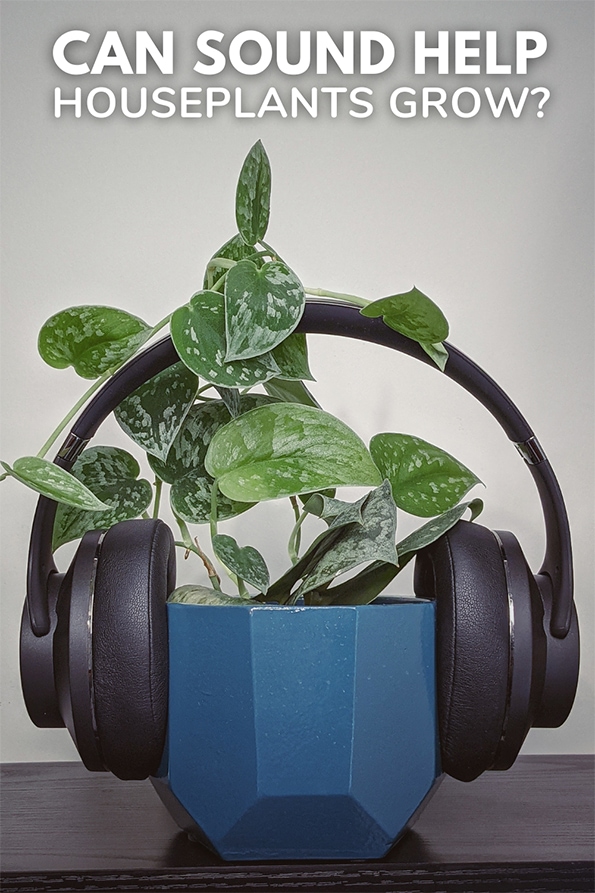 Does my Satin Pothos prefer rock music or classical music to be coming from these headphones?

The short answer is that the available science has shown plants can "hear" sound energy but it's not the same as how our ears function. In fact, it's a bit of a mystery how it all works. What's important, though, is that plants respond to sound and it can benefit them.

Do plants have ears?
The consensus is that plants do not have ears or hearing ability as we know it. Instead, plants can feel noise from the vibrations that acoustic sounds make.

Plants in numerous studies that were exposed to sound behaved differently than those that weren't. This ranged from more growth to strengthened plant immune systems with resistance to common pests like Spider Mites and Aphids. There was also some immunity to viruses and bacteria, along with a decreased incidence of mold.

So what sounds are best and should you act on the science to transform how you care for your houseplants? The rest of this article looks at what we know, including what the various studies and experiments show.

I'll also look at the takeaways and tell you what you can do for your indoor plant to help them grow better.

Can talking to plants help them grow?

Talking to your houseplants will sound crazy to some, to others it might seem perfectly normal. If you're someone who loves to chat with your Fiddle Leaf Fig about your day, then it would seem you're in good company.

The idea plants can hear dates back to 1848, where German Professor Gustav Fechner suggested they enjoyed human conversation. Almost 200 years later and the idea is still popular.

A recent study by Trees.com found that of the people surveyed, 48% said they spoke to their indoor plants, with one in five saying they did it daily. 23% even admitted they had kissed their plants.

So do human voices, affection and conversation help them to grow? Although 65% of people in the Trees.com survey said they believe it does, the science is less clear. 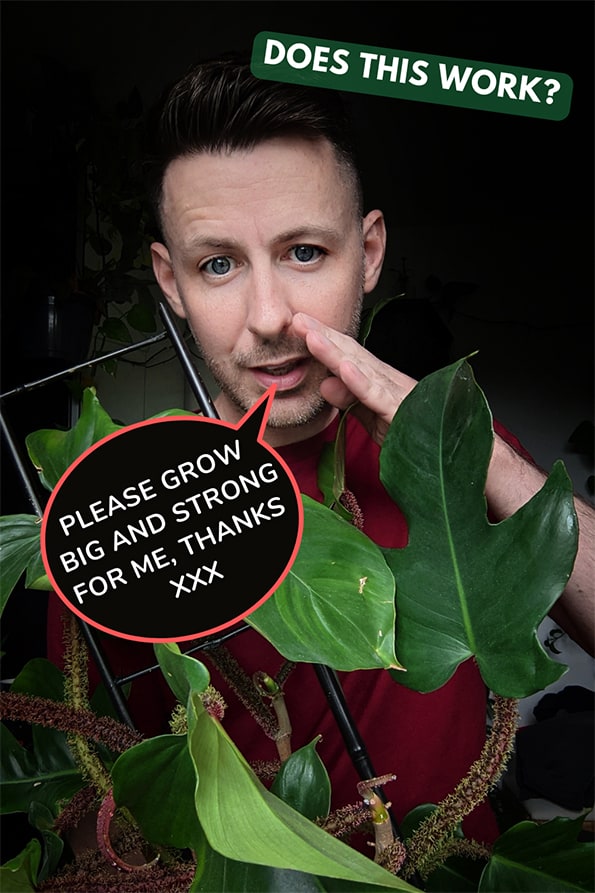 Can plants hear the sound of your voice? Do they prefer the sound of a female or male voice? Let's see what the researchers have to say.

There are plenty of anecdotal stories of people who swear that having daily conversations with their leafy friends helps them grow better. If taken at face value, then it does suggest houseplants enjoy our human voices and respond in positive ways. So what do the scientific studies say?

In 2009 the Royal Horticultural Society (RHS) recorded male and female voices and played them on a loop to tomato plants during a month-long study. Several plants were kept in silence to act as a control group.

The plant she spoke to grew the best of all. Coincidence? Or maybe the Darwin family have a gift for all things nature.

Despite this exciting and potentially helpful information, surprisingly, few studies have expanded on the RHS findings. Essentially the science doesn't yet, conclusively back the idea that talking to houseplants is beneficial to them in regard to human vocal tones.

One common explanation put forward is that when you're talking, you're emitting carbon dioxide from your breathing around your plant. Generally, when there are higher carbon dioxide levels, plants have a higher rate of photosynthesis.

Although, in principle, this makes sense, it doesn't account for two fundamental issues. One, you're unlikely to be talking to your plant for long periods for any increased rate of photosynthesis to make much difference.

And Two, it ignores that anything you put into the nearby area will quickly diffuse away, meaning the higher levels of carbon dioxide around your plant will only be there for a few seconds.

Does how you talk to a plant make a difference?
IKEA conducted a famous experiment in 2018 with two Corn Plants (Dracaena Fragrans). One was spoken to nicely, and the other was insulted and shouted at.

High levels of air exchange like this, is the same reason houseplants are not efficient at cleaning the air in our homes.

So what's going on? One of the most obvious (and less exciting) explanations is that people who talk to their plants are simply giving them more attention. Spotting problems and needs earlier than people who seldom interact with them.

So, does talking affect plant growth? Maybe. However, there is not enough hard science to prove it. Even the IKEA experiment can't be relied on as it only involved two plants and, conveniently provided the perfect result they wanted, that kind words and saying nice things are better than negative words.

Does music help plants to grow?

Okay, so perhaps talking to plants might not be a practical way to help our plants, even if we're convinced they understand what we're saying.

So what about something more passive, like playing music? After all, you can easily switch on a radio station or get your smart assistant device to play your tunes at the drop of a hat.

Fortunately, this is one area that scientists have conducted experiments. 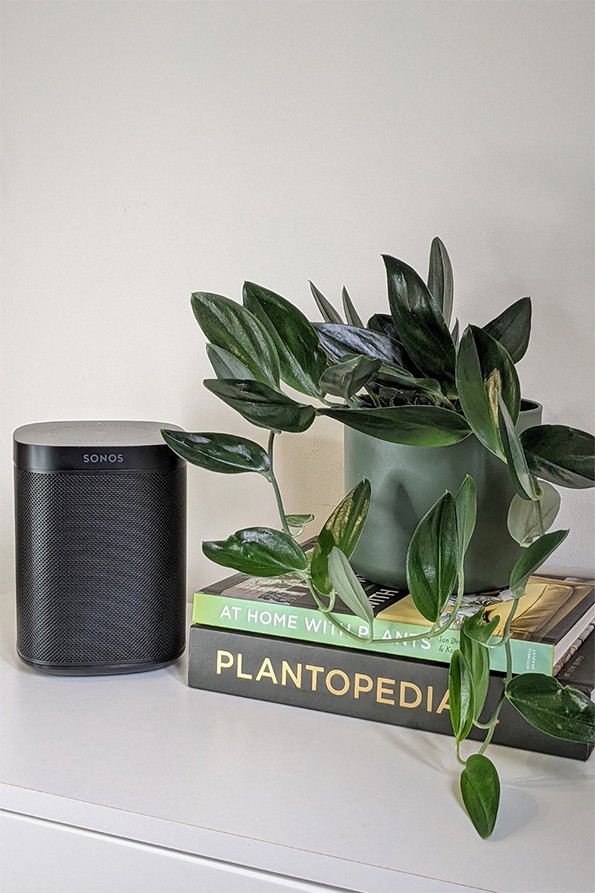 Do houseplants like the sound of music? Yes, they do, apparently some actually have taste and respond better to different genres of music.

I have a Scindapsus Treubii "Moonlight" and also the "Dark Form" version which you can see in the photo above.

The Dark Form version grows much faster than the Moonlight for me. But is that because it enjoys the music from my Sonos speaker or could it just be because they're in different rooms of my house with different growing conditions?

Maybe it is the music and perhaps it's a particular genre of music that it likes? Some scientists and botanists would certainly agree with this statement.

So does music help plants to grow? A lot of people think so, and some studies certainly support this.

In the 1960's Dr. T.C. Singh found that balsam plants grew almost 20% larger after being played classical music. He later experimented with other common crops like rice and peanuts and drew similar conclusions that plant music could stimulate new growth.

In 1973 Dorothy Retallack published The Sound of Music and Plants. This detailed several experiments she had conducted where a wide array of plants had responded to music being played to them.

When they were played classical music or easy listening, the plants would grow towards the music player. When playing heavy rock and roll they grew away from it. She continued to carry out a number of experiments including using different noise levels and tried to make them more scientific.

Just like the studies around talking to plants, the science around music being played is also inconclusive. Dr. T. C. Singh and Dorothy Retallack both suggested in explanation to their findings that the vibrations produced by classical music are closer to a gentle breeze, whereas rock music is very different.

They believed plants were favorable to certain types of music that resembled sounds they would naturally expect to hear, such as wind.

Is pop, heavy metal music or jazz music best?
Plants might not necessarily recognize different types of music, but they may react better (or worse) depending on if the piece has weaker or stronger vibrations.

That said, on an episode of the tv show Mythbusters they found plants grown in greenhouse experiments responded in similar ways no matter what type of music was being played.

So does music help plants to grow? A lot of people think so, and some studies certainly support this. However as the experiments surrounding this area have flaws the scientific community does not universally accept this idea.

Although talking, playing music, or putting on a set of headphones over your plants may not be the answer. There has been a lot of research demonstrating that sound vibrations can affect plant growth, supporting the view they can "hear."

It's thought that plants can listen out for external stimuli, like vibration, which then triggers biological processes within the plant cells.

For example, when Primrose plants were exposed to the sound of a buzzing bee, they started to produce more sweet nectar in the flowers to encourage pollinators.

Another study showed that plants could hear running water in nearby pipes and water running through the soil nearby. They responded by growing roots in the direction of the vibrations.

Experiments with sound waves caused strawberry plants to grow bigger, have deeper green leaves and flowered sooner than plants not exposed to sound. The study concluded that sound waves could therefore promote the growth of plants.

In all likelihood it's the vibrations from acoustic sounds that are having an effect on plants. This is one area that scientists generally agree. Rather than it being a case that talking is better than playing music, or vice versa, it's the low levels of vibrations from doing these things that provide the beneficial effect.

Let's sum up and my recommendations

Hopefully, I've been able to show you that, yes, houseplants can hear or rather "feel" sound. They can feel you talking to them and feel music playing and potentially, in certain circumstances, they will react to these sounds.

But in reality, the science is unclear regarding the practicalities of how sounds can be applied to benefit houseplants in everyday homes.

Should we all play classical music to our indoor plants and avoid heavy rock? Should we chat with them? What makes for "good vibrations"? How often, or how loud should we do these things for? Do the potential benefits apply to all houseplants equally?

These are the questions that have not yet been answered and I think it's going to be a while before they are. 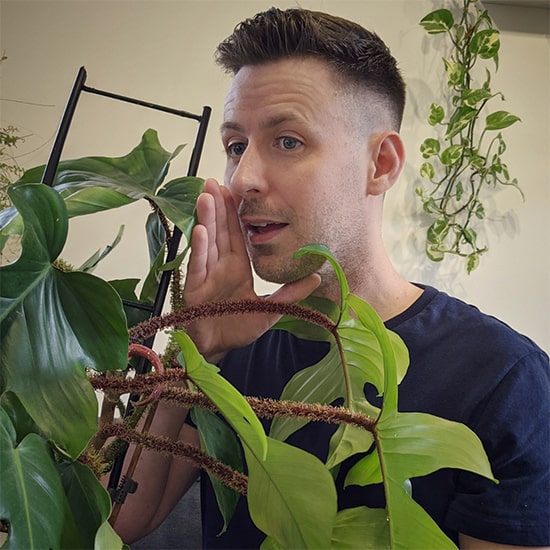 Would you whisper sweet nothings or share secrets to try and increase the growth rate of plants?

So what do I recommend? Well, although this is an interesting topic, there is no easily replicable studies that can be put into practice at home (currently). For example if I told you to grow your Peace Lily houseplant next to a radio player belting out Taylor Swift pop songs for more blooms, it might work. It might not. We just don't know.

Secondly, although experiments on plants using sound produced positive results in a number of cases, the overall improvements in growth or better health were generally minimal.

So, I think the best way to spend your time and effort to help your houseplants thrive is to give them enough light, water and feed them properly. This is going to ultimately yield the best results in the long term.

From what I've learned, sound can help plants and there is no harm in playing your houseplants your favorite song or having a conversation from time to time. It could even be good for you as their owner. That said, if your plant ever talks back to you, be careful.... It might plant ideas in your head!

How to Clean Plants the Right Way