About the Sago Palm

Cycas Revoluta or the Sago Palm is a beautiful easy care houseplant with a mischievous twist that easily fools people in three ways. Firstly, despite its common name of "Sago Palm", it's not actually a palm because it's a Cycad (although the care requirements are similar). 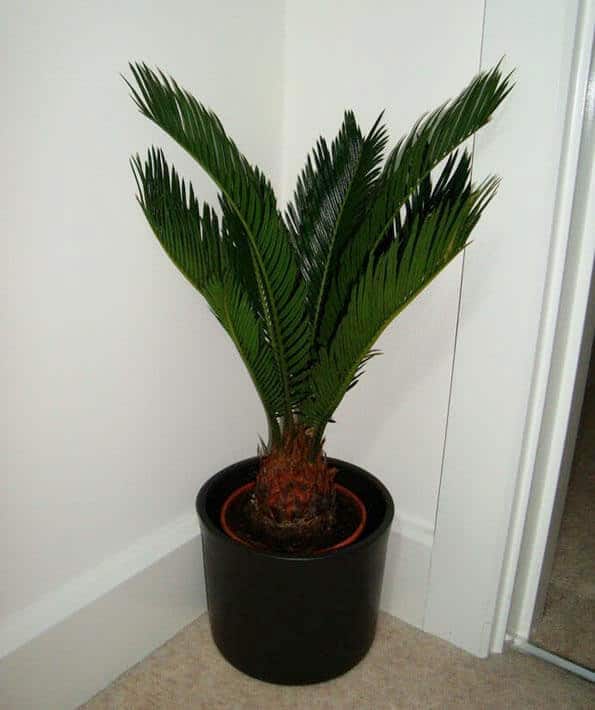 Secondly the Sago Palm has a reputation of being a modern indoor houseplant (which it most definitely is). However in truth, as an outdoor plant, its been around for million of years and so it's actually one of the oldest plants you can grow as a houseplant.

It's become more popular in the last decade as people have started to notice and appreciate the Sago Palm's easy going nature and very slow growth rate, it also doesn't need to be repotted too often and for allergy sufferers there is no pollen or flowers to deal with.

If treated well the leaves will rarely drop and producing only one or two new leaves a year means it will probably take ages to outgrow wherever you've put it in your home.

Finally, despite it's unfussy nature and harmless looking appearance the entirety of this plant is poisonous to animals and humans. A lot of houseplants have a slightly toxic and poisonous trait about them, but they either taste unpleasant so not enough of the plant is consumed to cause any damage or the toxicity isn't high enough to be a problem.

The Sago Palm is completely different, and while we rarely give such a warning you should not have this plant in your home (or office) if your pet(s) eats houseplants or you have young curious children.

The third point above might stop you point blank from having a Sago in your home, but if you've no inquisitive pets or young kids to worry about, this is a wonderful modern looking houseplant that you should give a second look at.

It's an easy going, almost maintenance free indoor plant, that tends to create a perfect fit for those hectic households which don't have much time for houseplant care or attention but when you just want something green (and very easy) around. 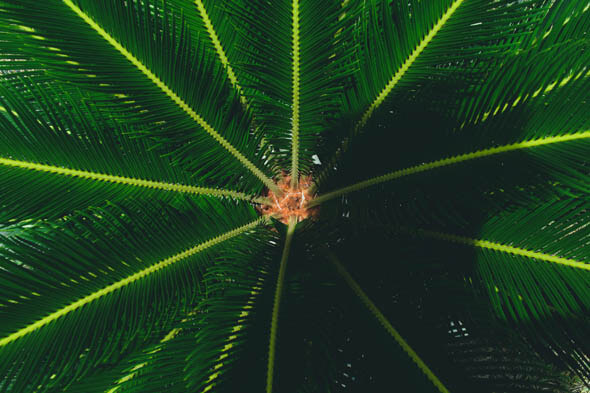 The semi glossy deep green leaves are quite tough and solid so resist damage well and maintain a rigid and symmetrical shape. They look tranquil and relaxing from a distance but stand their ground well against minor damage making it a mobile, can-do and hardy house guest.

There is only one species and variety of Sago Palm available to buy for the everyday shopper and that's Cycas Revoluta. As already touched upon, Sago Palms grow very slowly and as with most slow growing houseplants this increases the asking price and limits availability. Small plants tend to be reasonable in cost for what they can provide, but if you're after a large plant then be prepared for a hefty price tag. 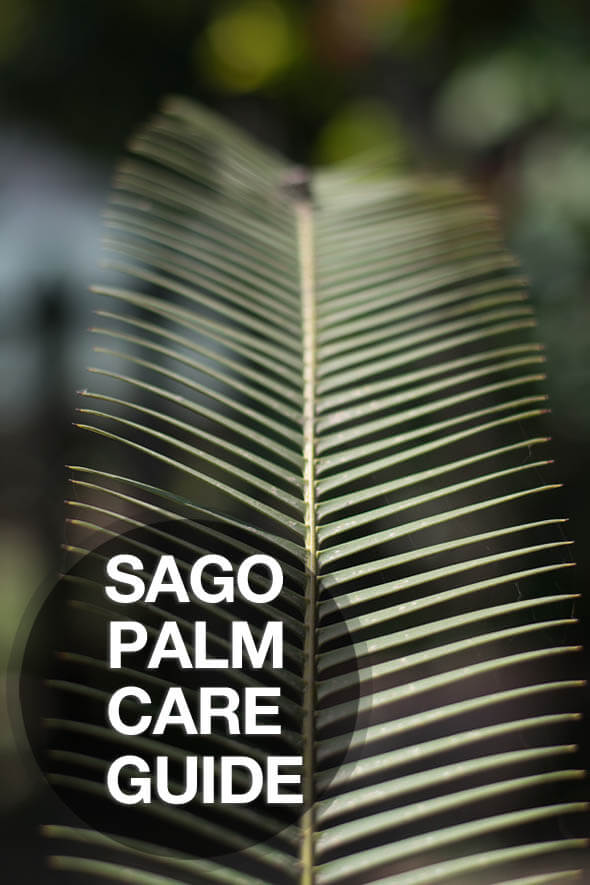 The gold standard for most houseplants is bright light but no direct sun and that's true for the Sago Palms. Too much light will cause damage to the leaves. If you provide too little light it will not show negative consequences for quite some time, but for the plants long term health, poor light levels also need to be avoided. So bright light with no direct sun should be your aim.

The trunk and fleshy leaves will store some water so Sago Palms do well with fairly long spells of no watering. However they're not a true succulent so will perish if they're never watered.

The real danger for these houseplants is overwatering, too much will encourage rot and that's what you need to be careful of. So water well and then don't do it again until the soil is almost completely dry. In Winter, when there is less light and temperatures are cooler you'll find you only need to water occasionally.

Whatever the humidity levels surrounding your plant are will be fine, Sago's aren't fussy.

Only provide feed between Spring and mid-Summer using a general houseplant fertiliser and no more than once or twice a year. You can use normal strength as per the instructions, but in all honestly because the Sago Palm just doesn't need that much feed, we personally dilute any fertiliser given to half strength.

Average home temperatures would be fine all year around. To prevent damage to the leaves and the trunk no lower than 5°C / 41°F is recommended.

Because of how slow a Sago Palm grows it takes forever for it to fill a pot and even then most are quite happy to stay crammed into their tiny homes for a while longer.

You only need to consider repotting if you're not getting any growth at all; the plant has become top heavy or wobbly in the existing container; or if it's been many many years since it was last done. Repot in early Spring, ideally using a free draining loam based compost.

You can only propagate these plants through seeds, but realistically hardly anyone attempts it. Those who do will already be Cycad experts and so won't need this guide.

The Sago Palm growth rate is painfully slow. This is truly one of the slowest growing houseplants out there. In fact some plants will only actually produce one single new leaf each year (although with great care it's normal to get a couple).

The most popular and current houseplant style for the indoor Sago Palm is smallish plants with a height of between a foot / 30cm and two foot / 60cm or so. You can of course get significantly bigger plants if you search or order them from specialists.

In general the plant you buy will stick at that height (or thereabouts) for a good many years. In perfect conditions after 100 years (yes you read that correctly) your plant might be 20 ft or more. Remember Sago Palm's living indoors grow very slowly.

The Sago Palm is a Cycad so will never produce flowers. Instead, these plants are either male or female and will have a corresponding sexual organ (no really, they do!), you can hand pollinate if you have a plant of each gender, but actually doing this is very uncommon for the average owner to attempt.

Is the Sago Palm Poisonous?

We've mentioned it at the start of the article, but we're saying it again. The Sago Palm is very toxic to cats and dogs and there is a high chance of serious damage or even death if any parts of this plant are consumed. Do not have this plant in your home if you have inquisitive pets or young children. There are many other non toxic houseplants to choose from so get something else instead.

This is a very slow growing houseplant. Take it easy with anything you give your Sago, from light, water, heat and feed. You won't encourage it to grow more by increasing the quantity or frequency of these things and in fact if you do, it may cause more harm than good.

How to Care for a Sago Palm Recap

Even with the best possible care yellowing on older leaves is normal (eventually the very old leaves are replaced) and not a concern if it's just one or two. Any other kind of yellowing needs to be investigated, 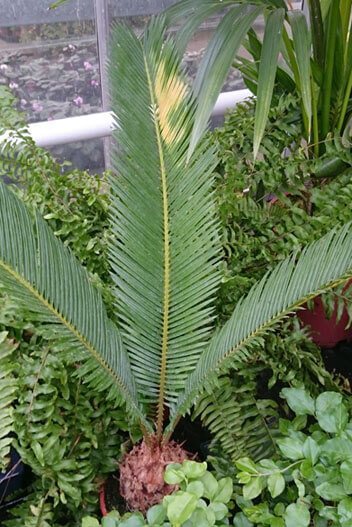 In many cases, yellow leaves in a random spot on your plant like the one in the picture is a strong indication of some sort of burn caused by placing it in direct sunlight.

If the yellowing starts at the very tips or the very base of your plant then it's often a watering problem (normally too much).

It takes a very long time for Sago Palms to replace damaged leaves through new growth, so you need to be careful as any mistakes will take a long time to be replaced by a new leaf.

Even if you give the very best conditions and treat your plant perfectly you won't get much growth from year to year. Sago Palms's simply do not grow quickly at all. A few new leaves each year is what most owners will get and that's your lot.

Seeing as the Sago Palm isn't fussy about humidity it's entirely possible you've chosen a very dry spot for your plant. This may encourage Red Spider Mites which love dry air. If you notice sticky webbing check out our Pest Article for tips in getting rid of this pest.

Fortunately the Sago Palm simply won't have enough "food" to support a large Colony of invading Scale Insects, but you may still get the odd solo visitor. Sometimes a simple blemish on a leaf might be mistaken for a Scale Insect so check this first. If you're sure it's Scale simply pick / scrap it off, or use a methylated spirit to dissolve it away.

Dired out and dead looking leaves

Whilst they can cope with drought for several weeks, if this goes on for too long some of the leaves will dry up and die off.

Obviously try not to let your plant get to this state, but if it ever does then cut back the truly dead leaves and provide better care going forward. Over time new leaves will be produced that will replace those you've removed.

However as we've mentioned several times, these plants grow slow. This means mistakes like this will take a long time to recover from in regard to the appearance. 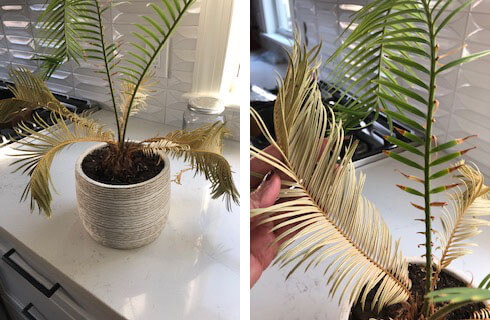 Sago Palm with dried out and dead looking leaves

Many houseplants enjoy a spell outside of the home or office from time to time. If you think your plant is looking a bit peaky, give it a few months holiday in the back garden / yard (obviously this holiday needs to take place during the warmer months of the year).

Direct sun should be avoided and if there are no drainage holes in the pot, take care rain doesn't cause it to become waterlogged. Don't forget to bring your plant back inside when Summer's over.

Are Your Houseplants Thriving or Surviving?