How to create and grow a terrarium bottle garden

Creating Your Own Bottle Garden

A Terrarium, Bottle Garden, or Wardian Case are all essentially the same thing in that each contains and supports a miniature ecosystem of plants.

Historically they were used to transport plants from their native countries to other countries where ordinarily they would not be able to survive in the new conditions. 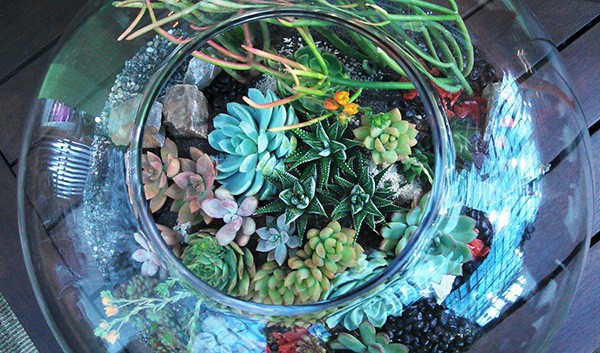 Houseplants can be grown in a Terrarium, A.K.A a Bottle Garden, or Wardian Case. Photo by J Brew

As time progressed they became more widely available to the public and this allowed houseplants to be protectivly grown under glass or plastic even though they were surrounded by unfavorable conditions.

A good example of this is the Victorians, who could now grow ferns despite their homes being filled with poisonous fumes which would normally kill these types of plants.

Today because Bottle Gardens are easy to create and maintain, they are commonly used as a substitute garden in areas where there is little or no outdoor space, such as in apartments.

Bottle Gardens are sometimes used in schools in order to study miniature ecosystem within a classroom. They are also used as a form of interior decoration with the containers often being as interesting as the plants grown within. Check Amazon for some inspiration.

If you like the look or idea of a Bottle Garden there is no reason why you shouldn't give it a go. They are very easy to set up and then look after going forward, you can grow many many different plants that would ordinarily be quite difficult in the home. Making fantastic gifts and presents to give to people, and really an almost limitless way to express your creatively.

Our article takes a very simple carboy and takes you through the stages in setting one up as well as detailing our attempt along the way.

Step One - Preparing the Terrarium

In many cases you will be starting with a brand new or very old Wardian case, bottle, carboy or terrarium, in any event it will need to be washed, to ensure the entire container is clean. A dusty outside will reduce the amount of light that reaches inside, and a dirty interior will do the same as well as encourage disease. Plus this is going to be a focal point in your home that will draw attention - you want it to be attractive! 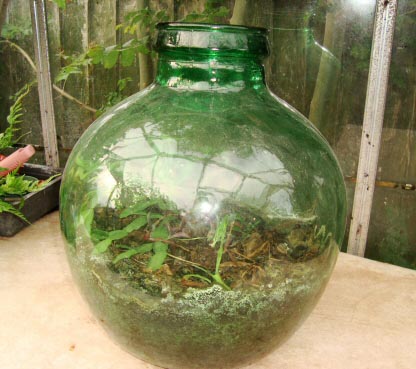 We are using an old carboy bottle that was previously being used as a plant terrarium already. The bottle was filthy and filled with a stray Christmas Cactus cutting that had developed into a small plant, some grass and a sickly looking Wandering Jew. The soil was breaking down and was generally unsuitable, so everything was discarded (except for the Christmas Cactus which was potted up into a normal pot) and the bottle thoroughly washed inside and out.

Once cleaned and dry you're ready to go. The container which will house the plants needs to be set up ready and to do this you just need to create two layers within the base of the container.

The first layer should be a very porous material to help with drainage and prevent fungal attacks caused by too much moisture. You can use material such as gravel, pebbles or sand, you can also add a thin layer of activated charcoal at this point if you want. The purpose of the charcoal is to reduce any smell caused by decomposition within the container later on.

The second layer is the growing medium, i.e. what the plant roots will grow into and use to support themselves such as soil compost. It needs to be quite a thick layer and certainly several times as much as the first porous layer. We followed our own instructions above but using a very thin later of porous material (pebbles) and no charcoal. This was because, firstly we did not have many pebbles to use and no activated charcoal. Secondly the first layer is generally a fail safe for incorrect watering technique, which (touch wood) we are usually good at.

The inside wasn't totally dry, so some of the compost that was poured in stuck to the sides however this wasn't a big problem as it could be washed down when it came to adding the water (more on this later).

Naturally the whole point of a Bottle Garden are the plants. Terrariums allow you to grow plants which require a high degree of humidity therefore your choice of potential inhabitants is huge although you must discount any houseplants which produce flowers. This is because flowers do not tend to do well in very moisture rich atmospheres and will rot easily.

Although there are many suitable candidates for your miniature garden you still need to give it a little thought first. To start with, think about the look you want to end up with, are you perhaps looking for a variety of colour with many different leaf shapes to create a bold contrast? Perhaps a consistent height level so everything grows to roughly the same size? Or perhaps you want visual structure in which case you would need some taller plants as well as some shorter ones. Once considered you need to think about their ability to live with one another in a cohesive way. Your chosen plants need to be reasonably slow growing so not to take over the others, they will all need similar light and water requirements. For example you don't want a traditional type of cactus mixed with a moisture loving Peace Lily. If you did this, the cactus would demand drier conditions than the Peace Lilly could live with and inevitably one of them will die as their needs cannot be balanced.

We opted for three distinct house plants all with different colours and all with different starting heights. Choosing a Croton for its striking green and yellow leaves, a Pteris Fern which will adore the high humidity the bottle garden will provide and a Pilea with it's silvery grey foliage and ground growing nature to cover the depths of the carboy.

All three plants will accept medium light levels, quite high humidity conditions and will be happy with warm temperatures, even in Winter.

In some respects this is the hardest part of the task and the difficulty factor rests solely on the size of your bottle neck opening. If the neck is large enough for you to get at least one of your hands inside, things are normally easy as you just need to carefully put one plant in at a time and then bury the root ball into the layer of compost you added previously.

Very narrow openings which do not allow the use of your hands within, means a limited ability to manipulate the plants and get them planted easily. You will need to revert to long handled spoons, long chop sticks or something similar, to enable you to dig out a small trench and then to help you lower the plants into the newly created hole. 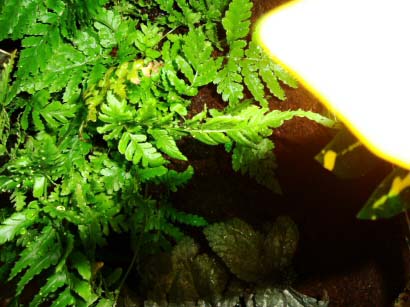 In any case always go slowly and don't be afraid to move things around or prune the plants until you are happy with the final look. Firm the soil gently around the roots. Do not crowd the plants so to allow them space to grow and spread, also do not directly push them against the sides of the container.

Our planting up experience was on the easier side because as you can see from the photos the carboy has a wide opening so we could use hands. However we did underestimate the height of the Croton, which was far too tall and didn't sit right. It had to come out for a little pruning before being returned to its new home.

The final thing to do in terms of the preparation is to water. Go carefully! You do not want to over do it. A funny thing happens when you put water into a bottle like this because if you pour the water against the inside of the glass it will run down the sides of the bottle and into the soil.

This is great for two reasons, firstly it flows to the very edges only and therefore does not dislodge the plants in the centre or splatter the compost around. Secondly you can gradually rotate the bottle so the entire inside is cleaned, this is brilliant if when you put the soil in initially it stuck on the glass like you can see in the photo..

Exactly as instructed above we slowly and carefully rotated the bottle garden using a watering can in order to clean the sides and also to ensure the entire compost was evenly moist in all areas. Several times we stopped and waited to check there was enough water before putting in a little more, knowing we could always add but would struggle to take away any if we over did it.

Step Six - Results and The Future

Once the above Five Steps have been followed that's it. All you need to do is move your new bottle garden to its new home and away we go. If you have a closed terrarium i.e. it has a lid or a stopper, at this stage you put that cover in place.

A closed Bottle Garden may never need watering again! An open Bottle Garden or terrarium will need a small amount of water every couple of months, if the opening is very wide then perhaps a little more often. Fertilising is seldom needed in either type of garden, however a very weak feed once a year in Spring may be of benefit if the plants appear to be growing much slower than you would like or are looking sickly.

Immediately remove any plants that die and because it's so important we are going to say it again, be careful when you water! Overdoing it will greatly increase the chances of a fungus or mould attack which will ruin all your hard work. Following the above instructions our Bottle Garden is now a couple of months old and has only been watered once. The Croton and Pilea have not grown at all, but this could be because it's cooler as we are getting close to Winter now. The Pteris Fern on the other hand is thriving and has grown, which we will pay close attention to going forward and if it starts to get out of control we will need to prune it to stop it taking over.

So how did you get on with your attempt? Let us know and share your pictures in the comments below. We'd love to hear your stories!

Does playing music or talking to plants help?

How to create a Houseplant Display Wall