Is it Safe to Have Plants in Your Bedroom?

"Is it OK to have plants in my bedroom?"

It's fairly common to hear, "you shouldn't keep houseplants in the bedroom because they're not safe". This is based on the fact that most plants will release Carbon Dioxide and absorb Oxygen from the air while you're sleeping.

It's totally true that many houseplants do this. But the reality is that the amount of Carbon Dioxide released and Oxygen absorbed is minimal (figures will be given and explained a little later). This means that it's absolutely safe to have plants in your bedroom.

I'm actually going to go one step further and make the case that in most cases, it's highly beneficial to have plants in your bedroom and I'll be telling you the reasons why. 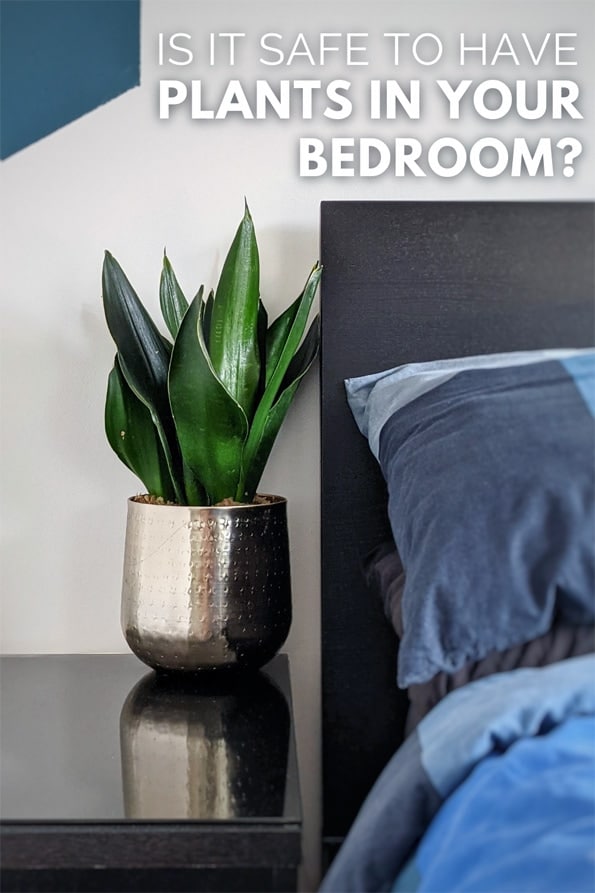 A bedside table makes a perfect spot for this Snake Plant (Mother-in-Law's Tongue). One of the best bedroom plants that doesn't need much care and will put up with both indirect light or direct sunlight.

Like any popular and enduring myth, there is always an element of truth to it. Not to get too sciencey, but here it is.

During the day plants will have access to daylight and they'll be busy using sunlight to make food by photosynthesis.

This involves taking air into their leaves through tiny holes called stomata, extracting the Carbon Dioxide (C02) from the air and then breaking it down to release Glucose and Oxygen (O2). The chemical formula for this is:

During the night, darkness will stop the process and it goes into reverse. The plant uses the glucose it's produced during the day, which is broken down, releasing some water and carbon dioxide in the process. The chemical formula is the same as above but in reverse.

So yes, the myth has truth to it. It's factually correct to say that many houseplants will release Carbon dioxide during the night.

It's factually correct to say that many houseplants will release Carbon dioxide during the night.

However, the rate of plant respiration during the night needs major context. It's a small amount. Like really, really small. In just ONE human exhale, the average amount of CO2 is around 35,000 parts per million (ppm).

In 2015 this study looked at how much a Ficus, Yucca and a Croton houseplant, increased the CO2 in the air over an entire night period. The results were that the Ficus increased it by 351 ppm, the Yucca by 310 ppm and the Croton at 84 ppm.

Bear in mind this was the total amount over an entire night of around 8 hours or so vs the 35,000 ppm produced by one human in one single breath. This is how that data looks in a pie chart (It's interactive - you can click things).

The Ficus released the most CO2, but it's minuscule compared to a person's emissions. You'd need to have 100 Ficus plants in your bedroom to equal the CO2 generated by just one of your inhale and exhales. In other words - what you've just put into the air around you while reading this paragraph.

Houseplants aren't going to cause you health issues or generate unhealthy levels of CO2 in your bedroom while you sleep. That's also factually correct.

Okay so we've clearly shown the amount of Carbon Dioxide plants release at night is minimal. But what about the other argument out there that they absorb Oxygen from the room?

As mentioned already, at night plants respire. This means they're busy breaking down that glucose created during the day, into energy. This process requires 6 molecules of O2 for every 1 glucose molecule broken down.

This might sound like a lot of O2 being taken from the air, but again you have to put this in context.

Respiration produces 6 CO2 molecules as a waste product for every glucose molecule broken down. From our earlier example, we looked at a study that recorded how much CO2 was produced by plants over an entire night. This ranged from 84 ppm to 351 ppm. So we already know that the amount of O2 molecules being used for respiration will be similar.

So again, it's factually correct for someone to say that most houseplants will absorb Oxygen from your bedroom at night.

In general conditions, it's roughly estimated there is around 209,500 ppm of Oxygen molecules in the air we breathe. So even the Ficus with the highest absorption of O2 is only using 0.17% of that over the entire night period.

We also don't live in sealed boxes, so any molecules being taken out of the air are just replaced through the basic ventilation found in our homes.

There are no directly comparable studies regarding people. Still, it should already be clear a person in one single inhale is going to absorb hundreds of times more O2 than any houseplant would over the entire night of 8 or so hours.

So again it's factually correct for someone to say that most houseplants will absorb Oxygen from your bedroom at night. But it's also accurate to say the amount they take is tiny and the impact on Oxygen levels is not even worth being bothered about.

No, they do not. To be clear, Carbon Monoxide is definitely not created or released by houseplants. The incomplete combustion of fuels produces it. As this has nothing to do with houseplants we don't have anything to add, but this website has information if you want to learn more.

Why plants in the bedroom should be avoided

The gases bedroom plants absorb or give out will not be a problem for you or cause sleep issues. But certain plants or placements might not be a good fit for a few practical reasons. 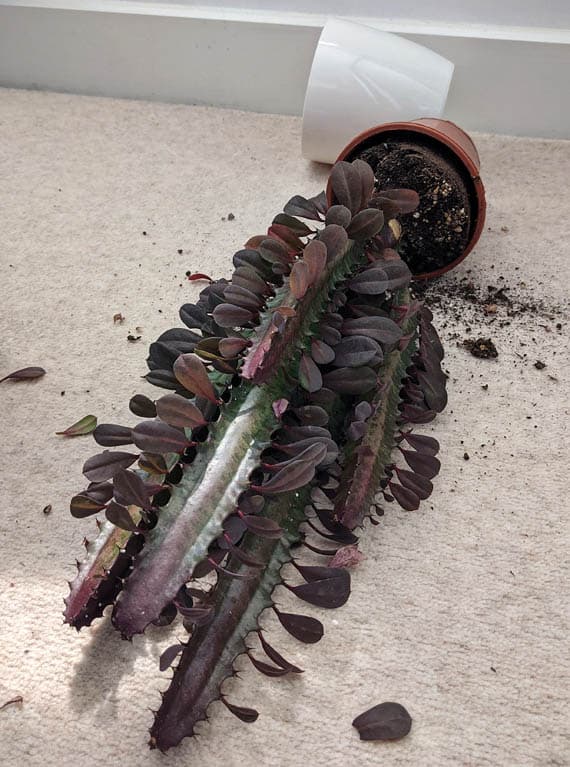 A bedroom can be a small space, so it might not be the best choice to have plants close to where you pass by, or they might get knocked over in the darkness. If you can, tuck it away in the corner of your bedroom instead.

Why plants in the bedroom should be encouraged

I could go on for ages about how much I love houseplants and why I think they're great companions to share your living spaces with. But here are some specific points relating to bedrooms supported by research. 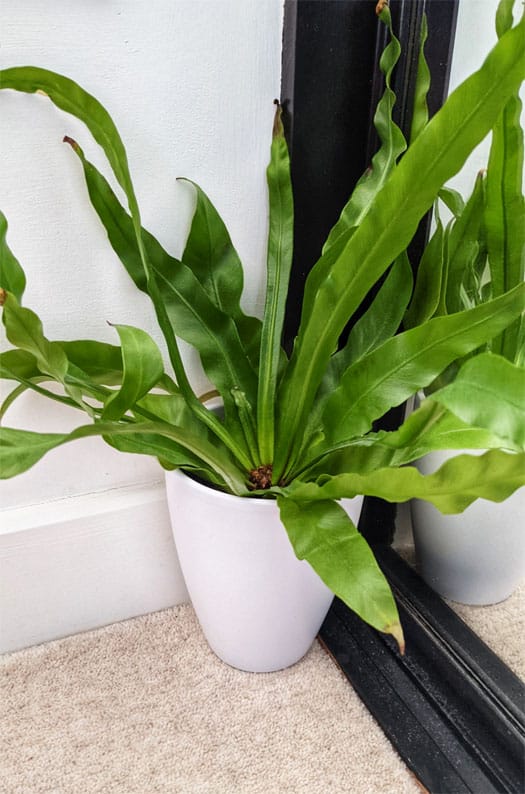 A common misconception is that you shouldn't have houseplants in your bedrooms. But with enough light, it's a fantastic way to encourage good health in your sleeping space.

Most plants will indeed release Carbon Dioxide and absorb Oxygen from the surrounding air while you're sleeping.

However, this gaseous exchange over an entire night is minimal. They don't produce enough carbon dioxide to cause negative effects. When you compare how much you produce or consume compared to the plants, it should immediately become a non-issue.

Still not convinced?
Some houseplants work backwards and produce small amounts of O2 and only give out CO2 during the daytime. This is due to a type of photosynthesis called "Crassulacean Acid Metabolism". We list some of the plants that do this in our article "Best Houseplants to grow in the Bedroom".

It's therefore completely safe to have houseplants in your bedroom. Both during the day and at night.

On the contrary, they're a great addition. I think it's fair to argue that the health benefits, including reducing stress levels and the sense of well being that you can gain (as well as the net increase in Oxygen given off during daylight hours) more than compensates for what they get up to at night.

Let us know what you think. Have you always slept with houseplants or has this been something that's worried you before now?

How to Propagate Houseplants

How well do houseplants really clean the air?