About the Yucca Houseplant

Yucca's are both indoor and outdoor plants. In fact when a lot of people hear the word Yucca they think about one of the many garden varieties which have dramatic clusters of white bell like flowers during Summer. However it's also a popular modern houseplant. 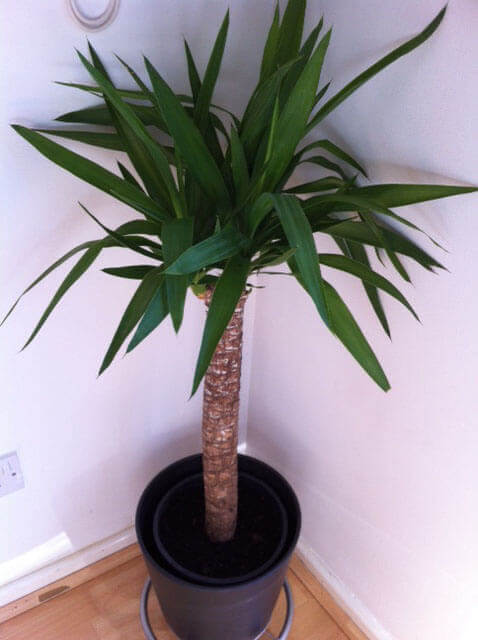 Although all varieties are easy enough to grow, there is generally only one popular variety grown as an indoor plant these days and that is Y. elephantipes, we would strongly advise giving any plant labeled Y. aloifolia a miss.

Did You Know?
It has only started to become popular as an indoor plant quite recently, in fact if you have any old houseplant books laying around it's quite normal not to find it mentioned at all.

The nickname given to Y. aloifolia is "Spanish Bayonet" and if that wasn't enough of a clue as to why it doesn't belong indoors, here in plain English is why you don't want it in your home; the leaves are razor sharp!

Accidentally brushing past without clothes on (it's been known to happen trust us) or leaning into Y. aloifolia can be pretty painful to say the least. Fortunately Y. elephantipes commonly known as the "Stick Yucca" or as it should now make more sense; the "Spineless Yucca" doesn't have razor sharp leaves.

A mature Yucca is bold and striking with straight angular edges, it looks very fitting in modern homes. Whereas younger, smaller plants will suit the majority of homes

The leaves of Y. elephantipes while not overly sharp still have a pointed end, so you should still take care. The wide sword shaped leaves are also pretty tough, you won't for example be able to rip them with your fingers and while such hardy greenery might please claw happy cat owners, they may enjoy using the bare "trunk" as a scratching post instead.

If you aren't sure which variety you are looking at, Y. aloifolia has narrow leaves that gradually taper to a sharp point, where as Y. elephantipes has wider sword shaped leaves that arch slightly. Which ever type you have, the care requirements are the same for each.

It's common to buy a Yucca which has been grown from a special "log" or stem, after potting it up, the new green growth emerges out of the top of this stem and the roots grow out of the bottom and into the soil. It can look a lot like a miniature palm tree, or in some cases a Dragon Tree (Dracaena). 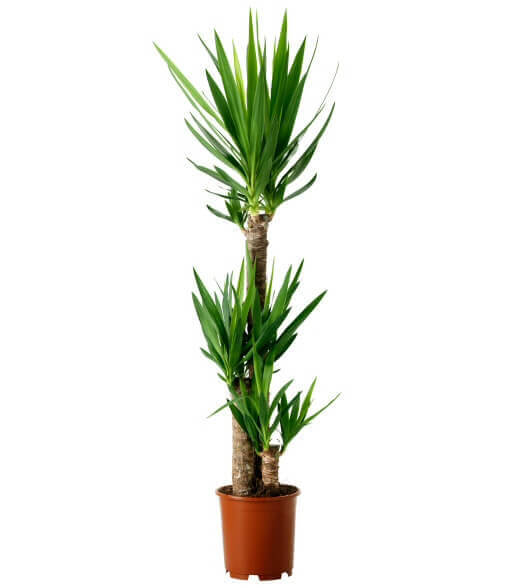 The leathery like leaves arch and will eventually yellow and fall off, replaced by the new top growth, this gradually increases the height of the plant. The exposed trunk is certainly attractive by itself but a tall plant can lose its appeal by appearing "leggy", and this is why its normal to find several Yucca's in a pot all of different sizes to negate this future "leggy" effect.

A mature Yucca is bold and striking with straight angular edges, it looks very fitting in modern minimalist homes as a stand alone specimen plant.

The smaller, younger Yucca's (which would suit the majority of homes style wise) are relatively cheap, and easily found. However the taller branched or pots containing multiple plants at different heights are considerably more in price and significantly harder to get hold of.

We've learnt a bit about the plant so lets dive into the Care instructions, which if you follow will keep your Yucca in great condition and health.

The Yucca plant is one garden and houseplant which will be quite happy with as much sun as you can give it. Indoors a South facing window would be the first choice. Whatever your light situation try to provide as much as possible.

Less bright conditions will slow growth considerably (which may be an advantage) however very shady and dark spots must be avoided to maintain a healthy looking plant.

Water your Yucca liberally during warmer months of the year. Like all plants it's impossible to give rigid watering intervals, but if conditions are exceptional (bright, warm etc) you could be looking to do this as frequently as once a week or more.

The soil should dry out a little between watering's. In Winter a lot less water is required.

Moderate humidity will be helpful, however misting of the leaves isn't needed.

A feed once a month or so would be appreciated during the growing seasons.

Your Yucca will tolerate a wide range of temperatures, but average home temperatures are best. Cooler in Winter if possible, but not lower than 7°C (45°F).

It's not essential, but a good rule of thumb is to repot every two years in Spring. The plants tend to become top heavy as most of the weight is centered at the top of the Yucca, planting in a deep heavy container will help prevent the plant from tipping over.

There is a more complicated method of taking Yucca root cane cuttings, however as we haven't done this ourselves we can't with good faith recommend it. The easier method is to remove the offsets that are produced from the trunk and pot them up.

Chances of the offsets growing will increase if you use a rooting hormone. Water well when first potting up, and then only again when the top inch of the soil has dried out, constantly moist conditions will encourage rot. The offsets should not be fed and should be kept out of direct sunlight until established.

Generally it is a narrow plant only spreading to around 50cm / 20in, however it can reach staggering heights of up to 4.5m / 15ft after many years.

A Yucca may produce flowers sometimes, although this is rare indoors. This plant is grown for its leaves and structural height rather than the flowers. However if conditions are good, after a number of years, similar sweet smelling white bell flowers you see on outdoor Yucca's may appear.

Is the Yucca plant Poisonous?

The Yucca is moderately poisonous to cats, dogs and people. While it can normally protect itself through the sharp edges on the leaves and hard protective bark on it's trunk, if persistent pets or children damage the plant enough they'll come across the poisonous elements inside. 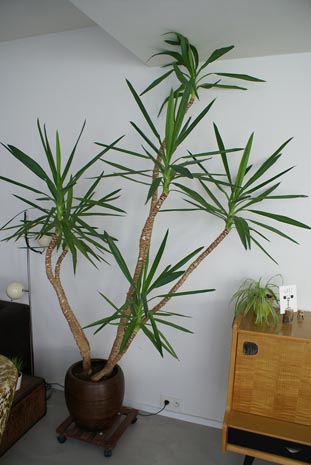 If the plant becomes too tall for the space then there is what we like to call the "leap of faith chop". This involves literally cutting / sawing a large top section of the plant off, usually in early Spring. This results in nothing more than a fancy looking "log" or "stump" sticking out of the pot. However in a short time the plant should produce new offsets from the cut edge.

The top bit you have removed with all the leaves can be potted up in a different pot of compost as a separate plant. Make sure you firm it in well to prevent it falling or rocking itself out of the pot.

The stump needs to re sprout new leaves, the part removed needs to grow new roots, however in both instances re growth is probable but never certain.

This kind of feels like a tongue-in-cheek moment where we add in a disclaimer about not being able to take responsibility if your favorite houseplant dies. In all seriousness, once you hack your beloved Yucca to bits you can't go back. There is a chance you will lose both "parts" of your plant so you should only go ahead if you are prepared for that. Hence the leap of faith.

This can be caused by Leaf Spot, remove badly affected leaves and spray with a fungicide. It can also be caused by poor air quality, particularly if the humidity is very high, or if exposed to temperatures below 7°C / 45°F these problems almost only ever occur in the Winter months.

White Film on the leaves

This problem keeps coming up in the comments below as well in direct emails. The photo below shows a good example. 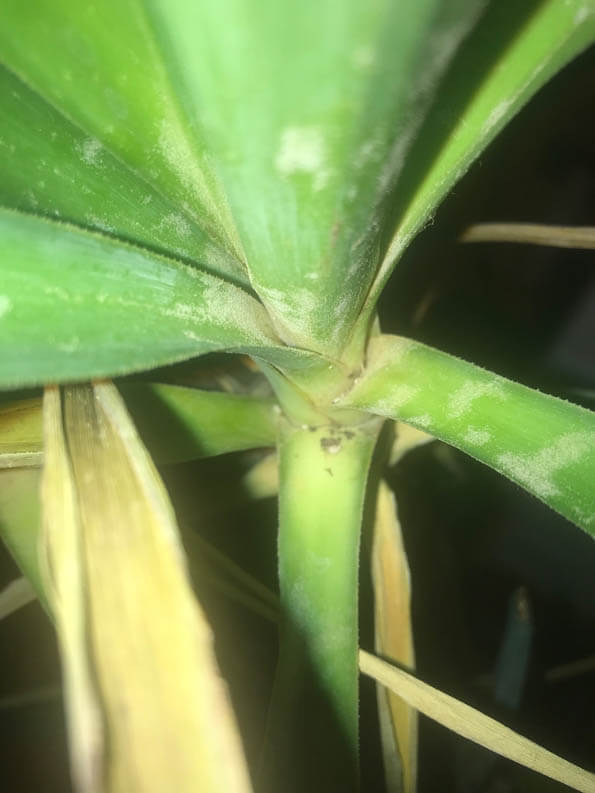 In almost all cases it's going to be caused by one of the following.

So what's wrong with the plant in the photo above? The owner shared several photos, some clearly showed the natural white marks, so parts of the plant were fine and didn't need any treatment.

However if you look closely you can see the white film is in spots and individual blotches. There are also black and brown dots in the creases of the leaves where they meet the stem, which isn't normal. So in this instance the Yucca has a pest infestation that needs to be treated accordingly.

This is one of the hardest problems to identity and resolve because it could caused by any number of things. Firstly some Yuccas will have this trait naturally (see gallery photos), if it comes on suddenly it could be caused by; poor watering techniques (over or under watering). Shock, after moving or repotting the plant. Too much fertiliser. Adjust accordingly.

Even if you restore conditions to what they were previously it may not be enough. Yucca's are often very difficult to bring back to health once they start to go downhill, so if it does succumb it might make you feel better to know you are in good company.

If you are pretty good with houseplants this will be rare, however these symptoms are usually caused by underwatering.

Further reading -
How often should I water my plants? 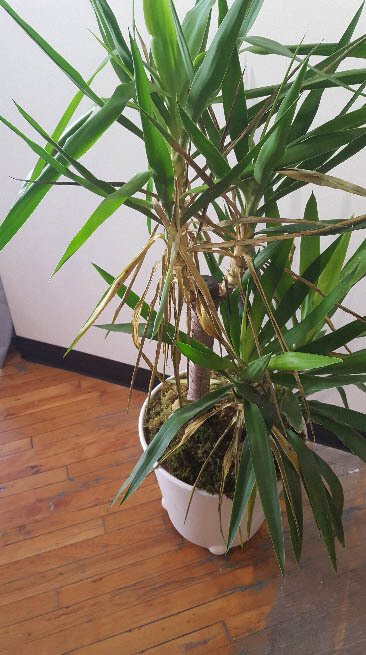 Yucca's have fairly long and thick leaves, so if any of the leaves are looking dead, brown or messy it can create a real eyesore as well as making it look like a problem exists when there isn't one.

The leaves are thick and tough and even when they die they don't fall off the plant nicely, instead they sort of hang there like the plant in the photo here. To restore things to it's formal attractive appearance you will need to get in there and gently but firmly pull the dead leaves downwards towards the floor. They should "rip" off the trunk / stem with no visible damage. It's very simple but really effective and will transform the look of your plant.

If you're having problems removing any of the leaves then simply cut them off as close to the trunk and stem as possible.

Usually a sign of constant overwatering. Ensure the soil dries out some before you water, and drain out any excess liquid left in the pot after half an hour.

Very low humidity is the typical cause, however it can also be a symptom of the previous problem.