HOME PLANTS GUIDES ABOUT US SEARCH

About the Jewel Orchid Houseplant

The Jewel Orchid or Ludisia discolor is unlike all other Orchids we grow in our homes, because as a houseplant the Jewel Orchid is prized for its foliage rather than its flowers. 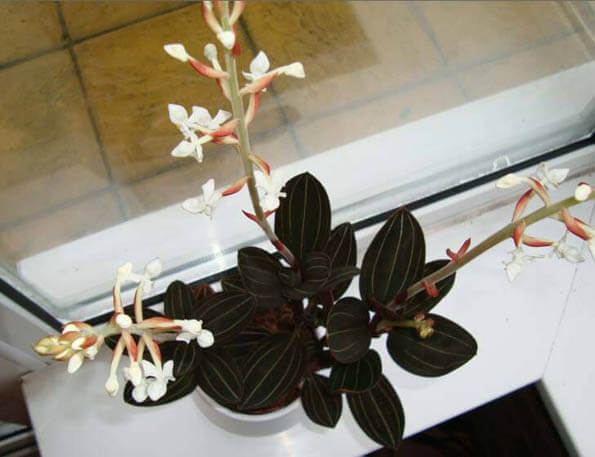 It's simple and easy to care for, quick growing and does still produce lovely white little flowers to give it a little more interest than the many other houseplants which are only grown for their foliage.

There is just one type of Ludisia Orchid and this has very dark green leaves with fine white pinstripe markings. In certain light the maroon colour underneath the leaves can shine through and turn the white lines a hue of red.

Unfortunately the plant itself and the flowers are not show-stoppers, so are easily overlooked when compared to its cousins such as the Moth and Cambria Orchids. But it has a contemporary and unusual charm that can appeal to those who chance upon them.

Bizarrely, unlike its cousins, the Jewel Orchid is really easy to propagate and grows to a large saleable size quickly. But sellers often still demand quite a lot of money which could be another reason why the Jewel Orchid's popularity hasn't really taken off.

However if you're keen on a bargain you could be in luck. Its discreet appearance means it's normally only sold when in flower, presumably as this little flourish commands that extra attention to draw the eye. So as the flowers start to go over, or at other times of the year, sellers often discount heavily to shift their remaining stock.

A large Jewel Orchid that is many years old will produce multiple growths each with several flowering spikes which will certainly create a lasting impression. With it's easy going nature it gets our seal of approval and it's definitely a good houseplant for you to consider growing in your home.

Out in it's natural habitat the Jewel Orchid is found growing down low, often in pretty shady places. For the best results try to replicate this in your home or office by avoiding placing it in direct sunlight.

North facing rooms are perfect, but any other facing aspect is fine providing you can shield the leaves from any harsh sunlight that filters through during the day. Do not mistake this as a plant which likes darkness though, gloom needs to be avoided as much as direct sunlight.

Slightly damp conditions are what the Jewel Orchid wants for the majority of the time. It does not like to have bone dry or soaking wet soil, leave its roots sitting in water and it will rapidly die. If you are using a more porous potting mix you will need to water more often than if using standard potting soil.

If you get the watering requirements (above) perfect, humidity is of only minor importance. If you know you are quite bad when it comes to watering though, give your Jewel Orchid a helping hand by increasing the surrounding humidity. This will give your plant a small buffer to compensate for the care you provide.

They do look lovely and thrive in Bottle Gardens but don't bother if you are keen on making it flower, because the blooms spoil quickly in the very moist environments that Bottle Gardens produce.

Jewel Orchids are small feeders, so in reality you will be totally fine if you only fed your plant a few times a year. You can use a special orchid feed or something more generic, it's not overly fussy.

If you are too cold or too hot then your Jewel Orchid is probably feeling the same. The lowest temperature that we'd risk is 10°C / 50°F.

Repot when the pot is overcrowded or if it starts to become wobbly and top heavy. These orchids tend to spread out rather than grow tall, so their roots do not need a deep pot, a shallow wide pot should be your first choice.

Unlike a lot of orchids you can actually use normal potting compost if you are very careful with the plants watering requirements. Normal potting soil is designed to hold on to water so if you accidentally saturate the soil this saturation stays around for quite a while and drastically increases the possibility of rotting.

If you don't feel comfortable or confident using potting compost then the alternative is to use a much more porous soil mix, for example 60% potting soil and 40% grit or perlite etc. A small amount of orchid bark is acceptable in place of grit, but is far too lose to hold much water so you shouldn't use a high amount of bark unless you're happy to water every couple of days.

The actual repotting is easy enough because it's the same method you would use for any other houseplant. We've linked to a YouTube Video below that we quite like if you want to see the repotting process visually. 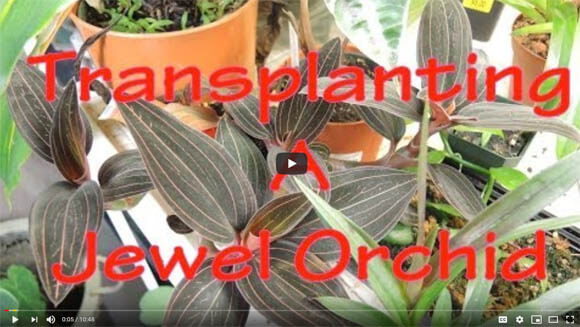 The stems are quite brittle and can easily break when you handle the Jewel Orchid so it's common to propagate through stem cuttings when you are repotting the main "cluster".

Nothing special is needed, once you have a piece of stem with upper leaves pot it up into a similar potting mix as the parent. New roots should develop within a few months, be careful until this happens as obviously the new plant won't be well anchored into whatever growing media you have chosen so can be knocked out easily. 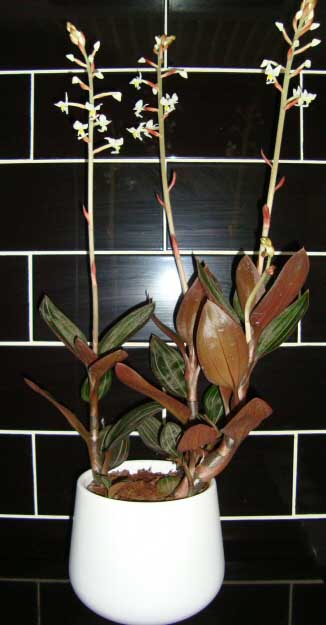 In Spring and Summer the Jewel Orchid grows rapidly if light levels are decent. In poor light and Winter the growth slows down.

The growth habit of these orchids is to spread rather than grow for height, so often they are wider than they are tall. The flowering stem can double or almost triple the height of the plant.

Large flowering spikes shoot out of tops of the plant stems in Autumn / Fall and Winter. Providing good light and correct care has been received during the growing season. Some people cut them off when the buds start to form as they are not considered to better the foliage in terms of appearance. However they are still dainty and pretty, with their small numerous white flowers with yellow centers. If the temperature isn't too warm they should last a few weeks up to a month.

Unlike some Orchids, the Jewel Orchid is not toxic to pets or people.

This can effect the soil of any house plant, simply because at times it's difficult to provide good ventilation indoors. It can be particularly bad on plants which cluster and naturally shield the soil with their stems and leaves, combined with their spreading habit which is how the Jewel Orchid grows. If you have white mold problem have a read of our disease article.

Although adaptable to our homes and quite easy going, too much water for too long will lead to destructive rotting of the stems and roots. This can also be caused by very cold temperatures. Once rot sets in your have a serious problem as its very difficult to reverse. Cut off the rotten bits if it's only minor, otherwise try to salvage what you can through propagation.

Young plants, sickly plants, or plants which are grown in low light conditions will all have a flowering issue in the sense that there won't be any. Jewel Orchids need to be mature, healthy and grown in a reasonable level of light before they flower.

This is typically a symptom of not watering enough.

Leaves are crispy or becoming lighter

Direct sunlight whilst not a killer can damage the appearance of the leaves. Too much light can cause the leaves to scorch or force the plant to adapt to all this light by reducing the amount of chlorophyll found in its leaves which can give a washed out look.

Our website is here to help you succeed with houseplants and get your indoor plants thriving. From the beginner to the more experienced, there's something for everyone. As a Team, we've almost 50 years of hands on experience in growing houseplants as well as a variety of horticulture skills and qualifications. So let us help you become a houseplant expert too.