It's likely to be one of the best plants to choose if you want something which clambers over various surfaces and can quickly cover bare surroundings without any help.

In return, all it needs from you is a cool environment and a reasonable amount of watering. Therefore it's the perfect guest for the unheated spare room or lonely hallway. 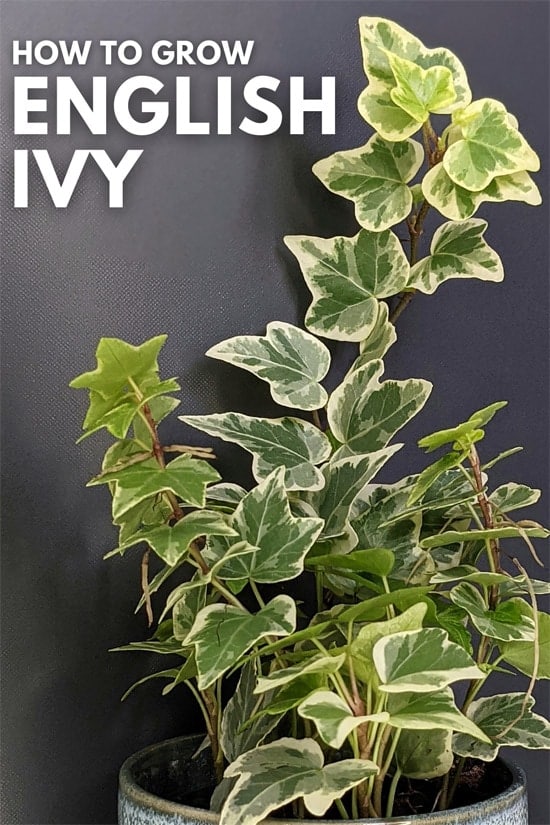 When this plant gets bigger, it would look good in a hanging basket or trained up a moss stick.

The plant cannot bring down solid foundations, although its clinging aerial roots can push inside cracks of poor construction that could make things worse.

It's a rapid grower outdoors and can also topple large tree's from its sheer weight. From this viewpoint, you can start to see why it's considered an invasive species or even a weed by some.

Common Ivy vs English Ivy
In some parts of the world, it's more commonly known as "English Ivy" and "Common Ivy" in others. It's all the same plant, though, so don't worry too much.

However, all these things apply to Ivy which grows outside, therefore if you would like it as a houseplant, which is an enclosed and controlled environment, why not! Bear in mind because of the negative attachments to this plant you may struggle to find places selling it, if you live in Australia, New Zealand and some parts of the United States.

Common Ivy is not Poison Ivy, so it's safe to handle as you would most plants. However, its leaves can be poisonous if ingested, along with the berries produced on very mature specimens. Treat it sensibly, i.e. don't eat any parts of the plant, and keep children and pets away, and you won't have any issues. 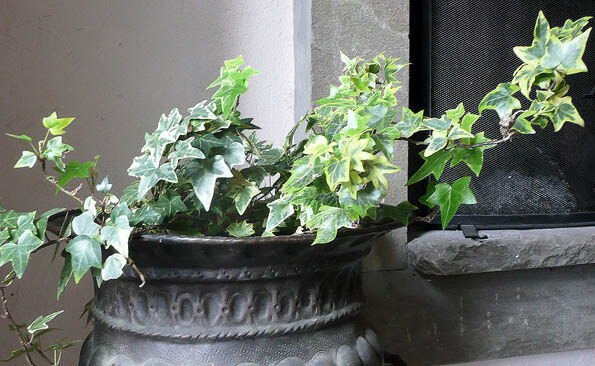 There are a couple of varieties you can buy as houseplants from stores. Some are green with slight mottled markings and others are variegated, with edges in cream or yellow.

Small Ivy plants will typically have a tight and compact growing habit. That's not to say they'll stay small by themselves (you'll still have to prune them if you want to keep that look!), but they won't have large gaps between leaves and stems won't become very thick and woody.

Can I take cuttings from wild Ivy plants?
You can, but it's not recommended. Many outdoor plants are wild and have very different growth habits. It's usually best to just stick with the cultivators picked as suitable for indoor gardening.

This "together" look is highly attractive to most people and one of the main differences between Ivy grown indoors vs the natural types you find growing outdoors.

You can find many cultivars of Ivy, but as its popularity is pretty varied, there may only be a handful available. If you're curious about this topic and some named varieties, then here is a good article to get started with.

Generally, you can get a variegated or an all-green variety. The variegated version needs average to bright light to retain its colorings. The all-green type will take darker locations, although growth will be slower as a trade off.

No direct sunlight or deep shade for either type.

No Ivy likes soaking wet conditions or completely dry soil. Aim for the middle ground by keeping the soil moist where possible.

Once watered, leave it alone until the top inch or two has dried out. Too much water around the roots can cause brown leaves and too little will result in leaf drop.

In darker, cooler spots, especially during winter, the soil will naturally stay moist for extended periods so you will need to water less at this time of the year. Mine have never been particularly thirsty and can go a couple of weeks between waterings.

Top Tip
Look out for leaves falling off as this is often a sign of the temperature being too warm and the air too dry.

They would prefer medium to high levels of humidity (anything above 40% relative humidity). Most homes will already provide suitable conditions, so you won't need to do anything for your plant. But if you live in a very arid home or are trying to grow a plant in an air-conditioned workplace, it might be too dry.

Feed during the growing season about once every two months with a weak all purpose solution, or one with a high nitrogen content. This is because when it comes to Ivies it's all about the foliage and nitrogen is the primary nutrient to help create this. 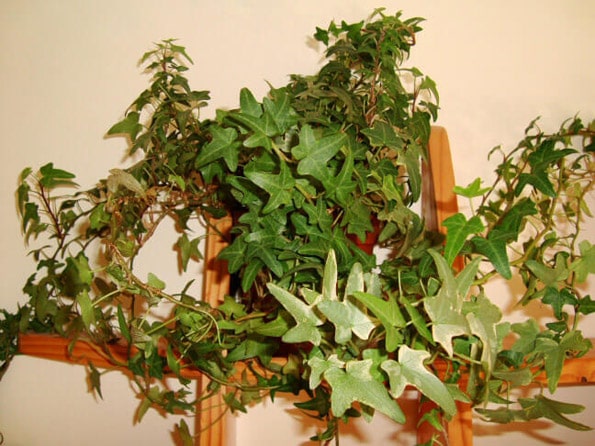 Ivy doesn't like hot temperatures. A temperature range between 10°C (50°F) - 18°C (65°F) is really what it wants. Warmer temperatures over a prolonged period will cause problems in the long term.

Most houseplants like average to warm temperatures so this is the ideal plant for a spare room, porch, or hallway.

Due to the effort spent producing aerial roots along its twisting stems, it takes a fair while for English Ivy to fill a normal-sized pot with its root system.

There will, of course, come a time when it's time for a new pot. Perhaps every 2 or 3 years or whenever you notice many roots coming out of the pot's drainage holes.

You can do so at any time of the year using standard soil, or basic potting compost. Some drainage is needed at the bottom of the pot to let excess water escape, but Ivy can adapt to most potting mixes without issues.

Just remember they like moist soil so very freely draining mixes should be avoided. 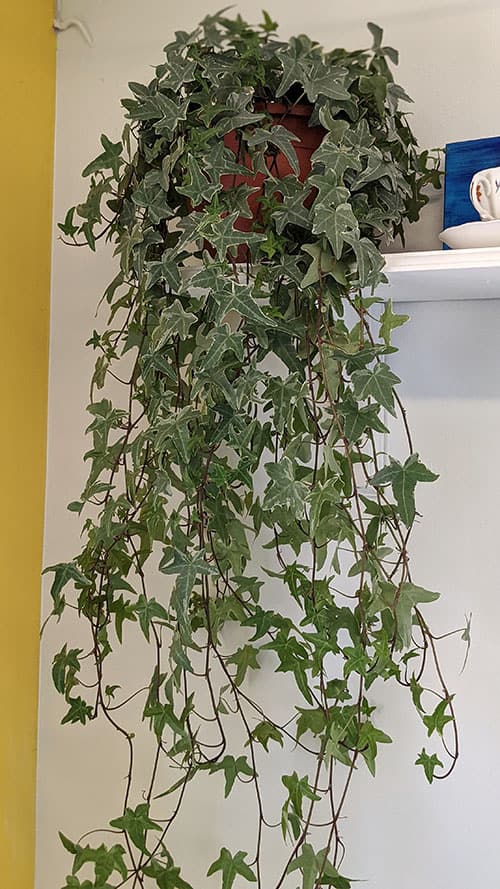 Mature Ivy being grown in a cool outside workshop. A perfect temperature for it to thrive and grow like this.

You can create more plants by removing the tips of the stems (which also encourage bushiness) and these can then be used as stem cuttings. This will give you lots of new plants that you can grow individually or plant up several cuttings in the same container for a fuller look.

How Fast Does English Ivy Grow?

English Ivy will grow quickly if the light levels are quite bright, things slow down in the cold months of the year or if you have found a darker area of your home for it to live.

Young plants will take a year or two before they're established, but after that point, several feet of growth a year is fairly typical.

The stems of your Ivy will keep on growing and trailing for as long as they have something to grab hold of and so long as you you don't pinch out the tops. 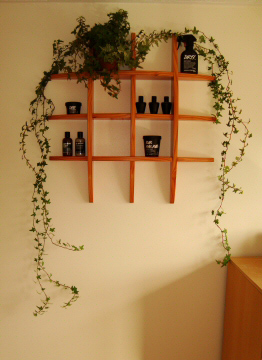 Growing in low light, this Ivy clambers over a wooden frame fixed to a wall

Flowers only appear on mature Ivy plants and rarely indoors. If you do get some however, berries might then appear. These are poisonous so be careful.

Ivy is toxic to animals and people if eaten in large quantities. If your plant grows berries, these should be removed if you have curious children or pets as they're more dangerous than the leaves themselves.

If you have a trailing vine that's too long for the space or you want a bushier plant, you can nip the tips off the growing stems. This forces new growth to form lower down the stems, creating dense regrowth.

How to Care for a Ivy Plant Recap

Ivy is usually a nice, easy-going plant, but things can still go wrong. The most common problems you might encounter are listed below.

This is a common problem when there is not enough light being provided. Move to a brighter location, avoiding direct sunshine.

Again not enough light. Move to a brighter location, avoiding direct sunshine. Cut back the stem to a bushier section which should crate new growth and basically replaces all that unattractive spindly growth.

Lots of leaves have brown edges and the newer stems have spindly growth.

Two common possibilities. The plant is too warm, move to a cooler location. Or you've been overwatering it. Too much water can cause leaf edges to go brown, try and avoid soggy soil and keep it a little on the dry side for a few weeks until it's recovered.

Lots of leaves falling is usually a symptom of underwatering, very low humidity levels, or being too warm. You'll have to assess your growing environment and recent care to figure out what's happened.

Usually this will have been caused by bacterial leaf spot or fungal disease because the growing conditions are very humid and the air circulation near the plant is very poor. This article explains a little more and shows you some photos of what it looks like.

If you notice it on your plant then start by removing the affected leaves (keeping them away from any other plant to prevent the problem spreading). Improve the air circulation and if the spotting is very bad consider applying a fungicide, suitable for houseplants.

Too much light. Move your Ivy to a shady spot away from the full sun. It may also be a sign of pest damage, like Thrips or Spider Mites.

Spider Mites are fairly common and I personally also had a Thrip problem that finished off one of my plants before I knew it. It's worth checking yours every so often because the dense foliage means it's easy for little insects to hide from sight.

If you spot any, treat the plant with some insecticidal soap or a Neem Oil spray.

Our story with Ivies

My previous home was a house built around 60 years ago, meaning it wasn't as energy efficient as a more modern home, so the rooms were bigger and cooler. The Ivy loved it. It grew easily and had really large trailing stems that I just left alone.

There are some pictures above and in the Gallery showing how long some of these stems got!

Fast forward and my current home is a new build house. The rooms are smaller, but the insulation is high specification meaning it's almost always warm. The Ivy hates it. It's very temperamental and I given up trying to grow it up in my living spaces as they're just too warm. 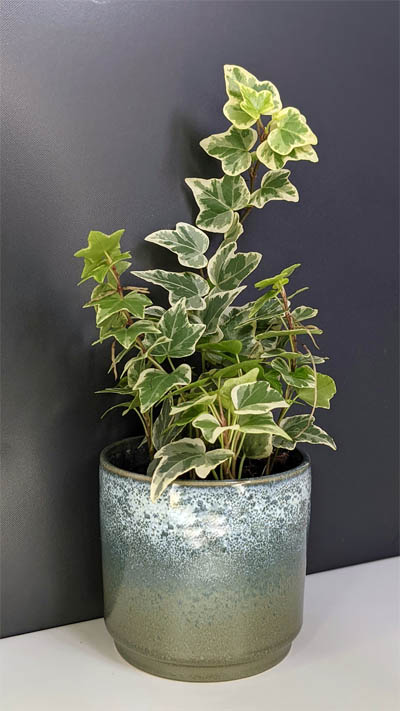 Although Ivy is fairly cheap to buy and is considered a common houseplant they'll still attractive.

Instead I have one plant on the go at the moment in my hallway near the front door. The coolest spot in the entire house that still gets a little light.

It doesn't look as glamorous as my older plants, and I'm rapidly concluding this is a plant that probably won't be able to stay in my collection.

It's a case of environmental conditions not being a good match, and nothing to do with what I think of Ivy in general. They honestly make fab easy going houseplants. They just need the right home to really do their best.

(Article / Gallery) - Ivy in a pot - photo by Cristina Sanvito