About the Cast Iron Aspidistra

Aspidistra elatior or the Cast Iron Plant belongs to the lily family and is native to China and Japan. Once a very popular houseplant it was a common feature of many a Victorian hallway, although its popularity has faded slightly since this period and is now less common in modern homes. 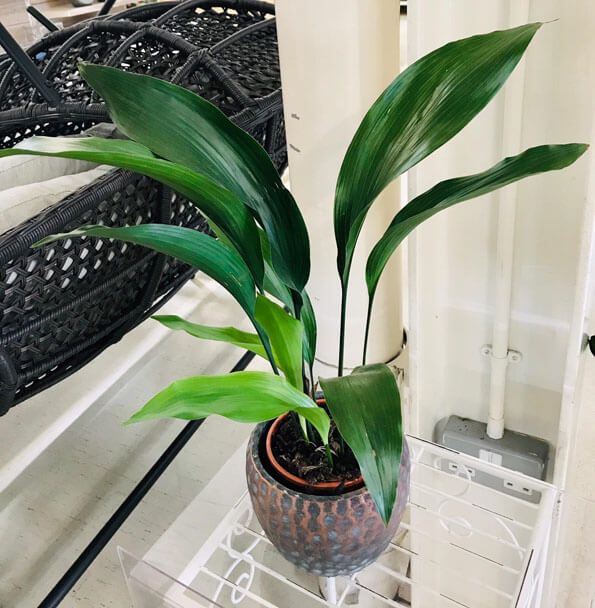 The fall in popularity however is nothing to do with the plant being complicated or difficult to keep. In fact because it's fully capable of dealing with poor light, murky conditions as well as poor air quality, warm or cold temperatures it received its nickname; Cast Iron Plant for its near indestructibility.

It famously even appeared in the 1936 novel "Keep the Aspidistra Flying" by George Orwell (although the book itself has nothing to do with houseplant care!).

The large paddle shaped leaves are often a dark shade of green and growing slowly it produces only a few new leaves a year. The main advantage of this is that it won't outgrow the location you choose for it, for a good many years.

It will live quite happily in many areas of the home without too much effort from you.

The disadvantage of growing so slowly means it does take a long time to grow to a saleable size, therefore Aspidistra's can be very expensive to buy. The cost, combined with some of the incorrect stereotypes that the plant is old fashioned and fussy in modern homes means it can be quite difficult to get hold of.

However it's definitely worth searching for, despite the stereotype it's actually a very forgiving and beautiful houseplant to grow. It will also live quite happily in many areas without too much effort from you. They also have incredible potential for longevity, with lots of anecdotal stories of peoples Aspidistra's reaching 50 years of age and beyond. 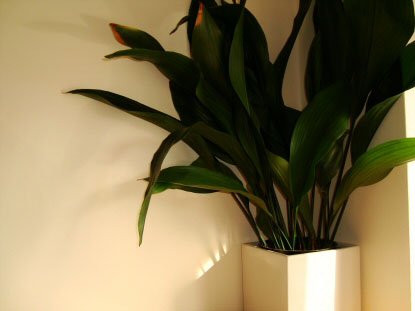 The most common variety of Aspidistra is the one with all green leaves, A. elatior (sometimes labeled as A. lurida). It's traditional, easy to care for and quite possibly the variety you're most likely to come across.

That said, there are some variegated varieties out there although they're harder to come across. Be prepared to seek out the specialist seller if you fall in love with variegated types and vow to yourself that you must own one.

The variegated varieties are less forgiving about lighting requirements as they'll need more light in order to retain their stripes. They can also be less hardy when it comes to temperature and are a little slower growing than their green cousin. The all green A. elatior is not a fast grower at the best of times, so a cultivar which is even slower may account for its lack of availability.

There are the speckled types like "Milky Way" (below), which have white speckles covering the leaves. 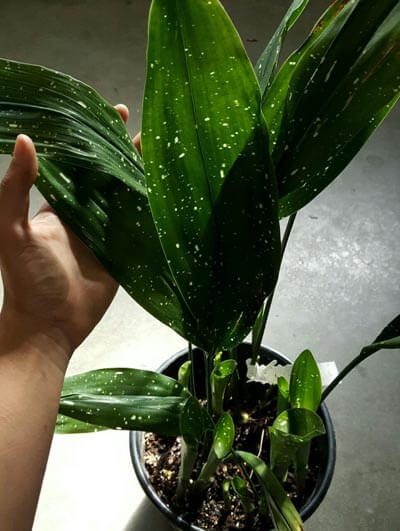 Then you have the Aspidistra's with stripes such as A. elatior Okame that have bold white markings. Whereas A. elatior variegata makes itself heard with its creamy white leaves, sometimes tinged with yellow or lime green.

Whether green or variegated, all Aspidistra's have the same care requirements in order to thrive. So read on for some photos, step by step care instructions, common plant problems as well as other readers comments and owners growing tips.

When it comes to the light requirements for an Aspidistra it's very easy to get right. Providing it isn't direct sunlight it can pretty much deal with any light it's given.

While difficult to kill generally, it won't survive sunshine (bright light is fine). So aim for a north facing window, or a shady / bright position deeper into a room with other facing aspects.

The Aspidistra's cast iron nature means it will deal with sporadic occasional watering easily and can work around dry soil. This houseplant is not a cactus though, so to really thrive it does need a reasonable amount of water during the growing season, although you'll need to let it dry out between watering's.

While difficult to kill generally, it won't survive sunshine

The soil should only ever be moist, never soaked or sodden. In the Winter months just enough is needed to keep it ticking over.

If you've chosen a dark or shady area for it to live, the need for water will be much less, so be careful not to overdo it as significant overwatering can be deadly.

Humidity levels are not important for the Cast Iron Plant.

Feed an Aspidistra during the growing season about once every two or three months with a weak houseplant feed solution.

A temperature range between 7°C - 29°C / 45°F - 85°F is ideal so you won't typically need to worry about this in the average home. If growing outside, these plants can cope with temperatures down to about −10 °C (14 °F) given some protection.

Do expect some die back and we really wouldn't recommend taking the risk with Grandma's 50 year old plant! Bring them indoors when the temperature drops.

You should only be repotting a Cast Iron Plant very occasionally. It strongly dislikes disturbance at its roots and like giving too much sun, frequent repotting will kill the plant.

For young plants you should not repot more than once a year and for a mature Aspidistra you're looking at doing it once every three or four years at the most. A pot slightly bigger than the current one and standard potting soil should be used.

If you want to propagate your plant you can do this when you repot it by slowly and carefully dividing the "clump", you'll need to keep at least two or three stems in each division.

The roots which are white and string like, are sensitive and don't like being damaged. But they're easy to handle and are sturdy compared to other houseplants, so it's best to try and divide the clump by hand, rather than using a spade or knife.

No matter what you do an Aspidistra will always grow quite slowly.

For example ours tends to only put out three or four new light green leaves each Spring. These slowly grow bigger and change to the familiar darker green over the rest of that particular growing season. 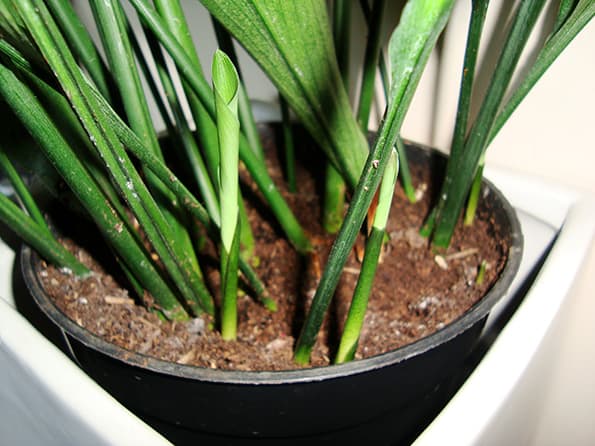 By the time September has arrived the new leaves from the Spring are indistinguishable from the older ones and that's the end of that years growth cycle.

Once established and mature, the leaves do not change from year to year, although it's normal for older Aspidistra leaves to go yellow and die off each year.

The maximum height and spread for these plants is usually no more than 1m / 3ft at most.

Yes you can get flowers on the Cast Iron Plant (see picture)! However, although quite rare, they're unremarkable and have no scent. Flowers emerge out of the ground and stay at soil level, this is because they're pollinated by slugs, snails and Amphipods out in their natural habitat. 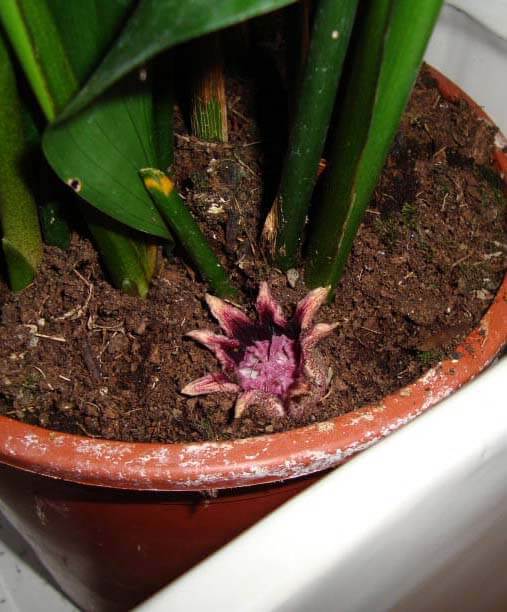 It's normal to only get one flower at a time, and typically each one will last for a few weeks. Only mature plants will produce flowers and the light levels need to be reasonably good.

Is the Aspidistra Poisonous?

The beautiful Aspidistra plant has the added benefit of not being toxic to people, cats or dogs.

The large paddle leaves are true dust magnets. Although dusty leaves won't harm the plant, it can dull the look of your plant so, wash them every six months to keep them looking at their best.

How to Care for an Aspidistra Recap

The Aspidistra is a tolerant and hardy plant, it can stand dark hallways, cool temperatures and polluted air, but if you're having problems have a look below.

This can be difficult to diagnose as brown tips on the leaves can be caused by a variety of things. You'll need to read the below and relate it to your past care techniques to understand what's gone wrong. Meanwhile you can cut the brown tips off without harming the leaves.

Aspidistra is a little like a vampire in the sense it doesn't need a great deal to live, but it absolutely can not stand bright sunlight. It needs a shady / bright location or the weak filtered sunlight from another aspect, anything more is too much.

The odd leaf going yellow is normal and not something to be worried about. However if the leaves are going yellow on mass, or one at a time but over a long period this is a problem and is often caused by one of the following:

Possible Cure: The yellowing problem happened to our Aspidistra once before. Probably from too much water in the dead of Winter (we can all get it wrong sometimes!).

Sometimes individual stems do these things to try and allow the rest of the plant to survive and after one leaf went totally yellow it was like it sent a signal to another one to start yellowing up.

Starting from the centre of the leaf, a number of leaves kept going yellow one by one in a cascade effect and after slowly losing seven large leaves over a number of weeks, things were becoming quite worrying.

In the end we halted the yellowing by taking a radical approach by cutting off an entire leaf stem very close to the soil that had the very first signs of a yellow streak appearing. This seemed to stop the "signal cascade" and there was no more yellowing going forward.

It worked for us. If you have the same problem give it a go!

How to clean House Plants

Why House Plants are good for health