What to do with Orchids After they Bloom? (4 Options)

"What to do with Orchids after they've Flowered?"

Moth Orchids (Phalaenopsis) make brilliant showy houseplants and can easily bloom for months. But what should you do once the flowers have all dropped off and it looks like the plant below?

Well, you've got four choices to pick from. I'm going to give you some pointers and tips in helping you choose which option is right for your plant so you can learn how to get your orchid to flower again. 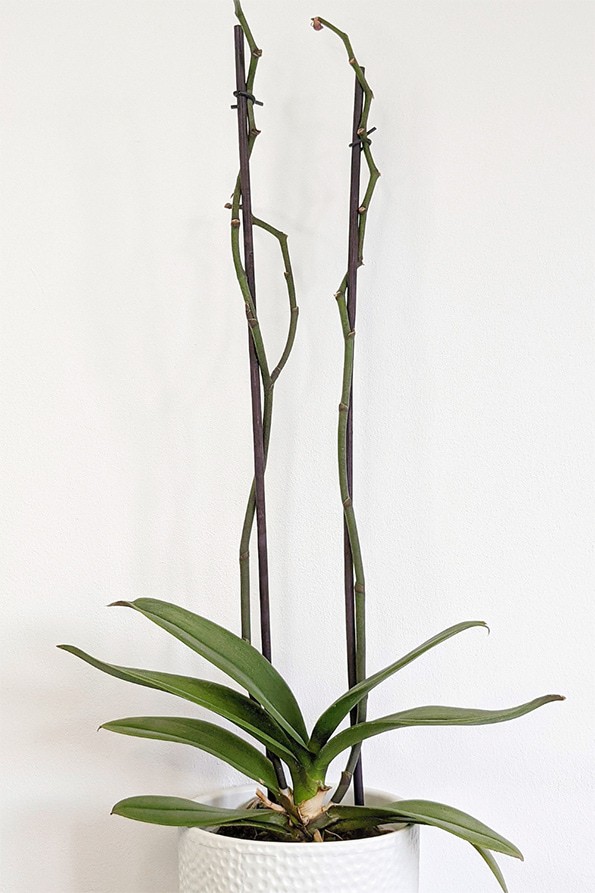 You don't need to discard your Phalaenopsis Orchids when this happens. With a little knowledge and care, you can quickly get it to bloom again and again.

Most people want their plant to rebloom; three of the four choices below will help with this. The remaining choice should be picked when your plant's in poor health and needs some TLC.

I quickly cover this over on YouTube, which I'll link to below. However, read on if you'd rather not hear my British accent and would prefer to see detailed photos and a more in-depth explanation of each step.

Watch our short YouTube video if you want a visual guide.

Most Moth Orchids you can buy today are hybrids or have been bred to produce as many blooms as possible. Almost to a fault and determent to the plant's long term health. This means lots of flowers on each flowering stem and much more frequent flowering.

Great news if you love your Orchid when it's doing this, but perhaps not so great if you were hoping to own your plant for many years to come.

Option four specifically attempts to encourage your plant to produce a new flower spike(s) immediately, but there are perhaps certain occasions when you should give it a miss.

Chances are, if you meet any of the rules above, your Orchid's not in the best health. Your first port of call, is our Phalaenopsis (Moth Orchid) Care Guide. Let's get your plant looking a bit healthier, maybe grow a leaf or two and then try for more flowers.

So how do you discourage repeat blooming?

That's easy. Cut the flower stems off at the base right after flowering. Then if your plant attempts to produce new flowering stems over the next couple of months, you just remove them as soon as you notice them forming.

Once removed, its effort will be directed towards growing new leaves and roots.

After the flowers fall off, you will be left with at least one "alive" stem. Sometimes more. All you have to do here is leave them alone.

It's pretty common for your orchid to grow a natural extension on the existing stems and start to produce more blooms. However, there are two things to note here.

If these things don't bother you, leaving your plant alone after flowering is a perfectly good pick to get a quick but smaller second splash of orchid flowers on the existing stems. If you'd rather have a larger flush of color, have a read of the three other choices.

One other thing to mention is that sometimes the plant will just not add any further growth to the stems. You'll know this is happening because they will start to go brown and dry up.

If this happens, you can cut them back to the base. Or if any of the stem lower down is still green and alive, you can cut above a node to trigger a regrowth.

Cut the Flowering Spike Back to the Base

There could be a few reasons you would want to go for this option.

If cutting the stem back to the base is something you want to do, then here's how you go about it. 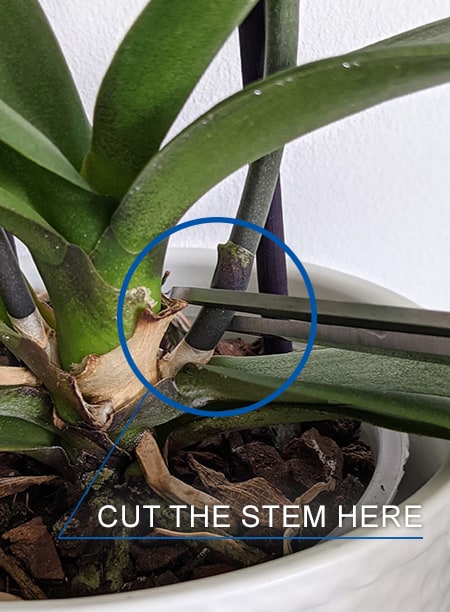 Scissors about to cut the flowering spike on a moth orchid.

Get as close to the plant as possible and with a sharp knife or a pair of scissors you just snip the stem. Take care not to cut any aerial roots or leaves in the process.

The stem you've removed has no purpose and no, you can't grow replacement plants from it, so you can safely discard it. 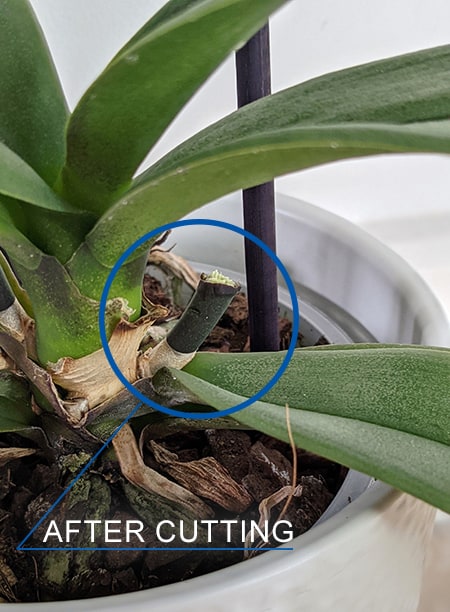 After cutting the flowering stem back to the base of the plant this is what it should look like.

As long as you've cut close enough to the base, that will be it. The cut edge will callous over and the remaining stump will go brown in time.

Some plants might produce a brand new flowering shoot nearby, but the one you've removed won't do anything more.

Cut the Flowering Spike at a Node

There is only one reason anyone would want to make a cut or "prune" just above a node: you want to encourage and stimulate your plant to produce a second flush of flowers.

Fortunately, it's very easy to do and has a pretty good success rate in working. 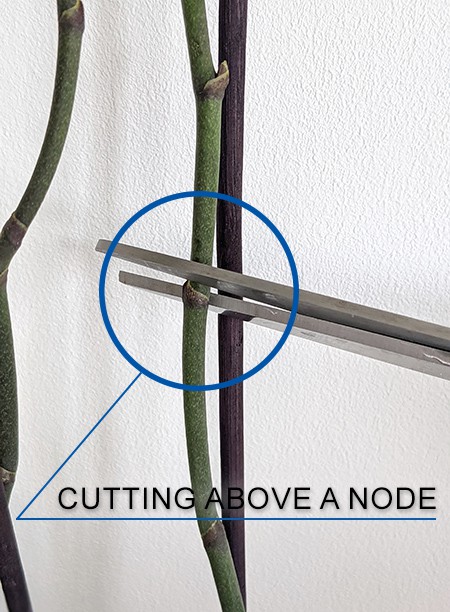 Cutting just above a node on an old flowering stem.

All you need to do is make the cut just above a join or "node". What's that you ask? Well, if you look at the stems, you will see a little raised bump area every couple of inches.

These are nodes and if you disrupt the flow of plant hormones and fluids at these points new growth can sprout from here.

Bear in mind, this will only work if there is sap flowering in the area you want to cut. You can tell if this is the case by looking at the stem, it should be like the one in the photo above. If it's brown or shriveling, move to a node lower down. 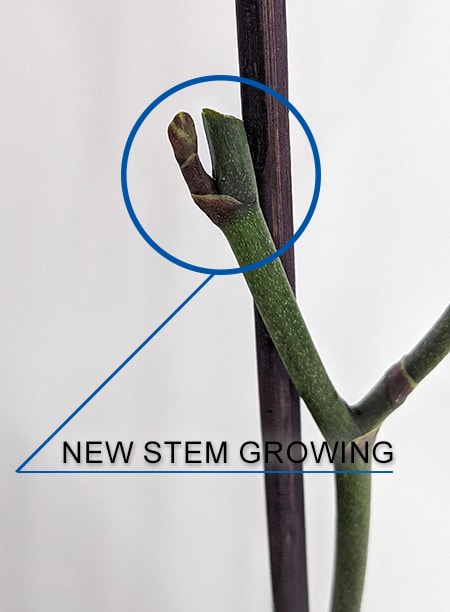 There is no exact science about how high to cut above the node. But for aesthetics, I always try and get it close enough without damaging the growth point.

Keiki (pronounced Kay-Key)
Although rare, sometimes, you'll end up with a baby plant growing from the node instead of a new flowering spike. It may look like something abnormal to start with, but in time it will better resemble a baby orchid.

All being well, within a few weeks, you will see a new flowering growth forming at the node. This means it's worked!

The new shoot will bend towards light sources as it grows, so you'll need to help guide its direction. You can do this by rotating the pot a quarter turn every few days or using support sticks, butterfly clips, or small cable ties. Be careful, though, as the new growth is very delicate at the start for several weeks and is easily damaged.

Sometimes this trick won't work. It could be a sign your plant's exhausted and wants a rest.

My advice here is to just go with whatever your Orchid wants. Don't worry though, in a few months or so it could be ready to produce more blooms.

Frequently Asked Questions (and some Pointers)

How long does it take for Orchids to rebloom?

With good growing conditions and care, you can expect more flowers to appear between two and nine months.

Leaving your plant alone or cutting above a node can trigger repeat flowering fairly quickly, but you're unlikely to get as many flowers as you did when you first got your plant.

Cutting back to the base and discouraging repeat flowering could mean it will be almost nine months before you see another flower. However it's often worth the wait, as you will typically get many more flower buds if the plant's been rested.

Why is my Orchid not reflowering?

If it's been longer than the periods stated in the previous question, then there is a reasonably high chance (or several) of the following being the cause.

Can you pick multiple options at once?

If you've got a healthy plant then yes, absolutely. They might not all work, but if you have multiple flowering stems to work with, then you've got nothing to lose. 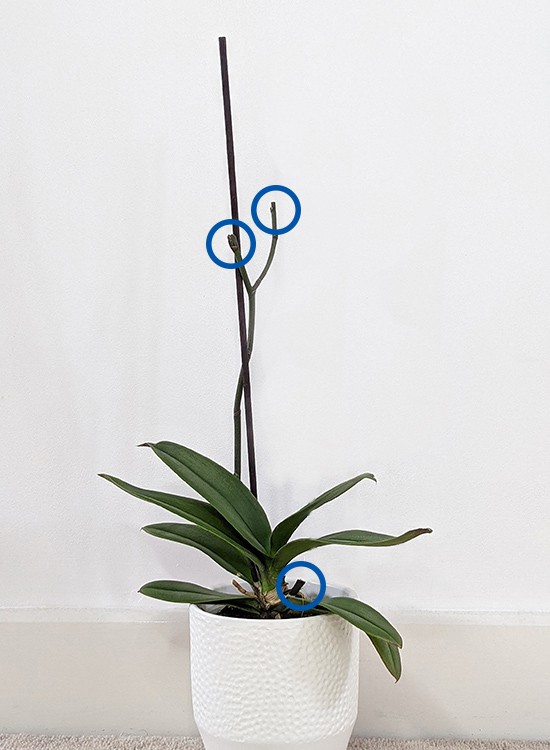 Orchid houseplant, showing the stem before and after pruning.

Use the slider in the above photo to move or tap back and forwards.

You can see what the plant initially looked like, then after pruning one stem back to the base and then cutting the other in two different places just above a node to stimulate (hopefully) new growth shoots.

What time of year do they flower and does this make a difference to what I should do after blooming?

It's true that a healthy orchid usually performs best after a short resting period while waiting for the next blooming cycle. But the modern plants you can buy will be in flower pretty much any time of the year for two or more months. So there will always be some overlap over Winter, Spring, Summer and Fall for example.

The time of year isn't really a factor in your choice, especially if your plant is growing indoors. Follow the rules and guidelines already outlined above.

No is the basic answer. They can sometimes help with watering your plants by slowly dripping the water down to the roots as the ice melts, especially if they're potted up in a very free draining bark mix.

This will help prevent root rot, but you need to ensure you water your plant when the root system within the pot goes silvery, otherwise new blooms will be a distant dream.

But in all honestly, even if you only give it a quick water using a kitchen tap and it all pours out the bottom in seconds, the roots will still "absorb" a fair amount of water as it passes through.

In my opinion, using ice cubes is just too much hassle and time consuming in day to day houseplant care. There are some occasions when you might want to water your plants with Ice Cubes, but good orchid care isn't one of them.

I've also read people suggesting that as temperature changes trigger Moth Orchids flowering, ice cubes can help with this. Yes, changing temperatures between day and night are thought to be critical in triggering growth and flowering (The American Orchid Society has more on this).

But again, this is pretty much a myth and makes no real sense. The ice cube isn't going to lower the temperature by a significant amount and any decrease will only last until the ice has melted.

Moth Orchids prefer intermediate to warm conditions, our homes provide this. Warmer by day and cooler by night. So I'd estimate that 95%+ of owners don't need to think about this.

Is it worth doing?

Of course, it is. One of the greatest enjoyments of houseplant ownership is taking your plant through the natural parts of its life and helping it along the way.

Reblooming a Phalaenopsis Orchid is rewarding, easy to do and costs you nothing other than a little time and some kind of cutting tool (which you likely have around anyway). 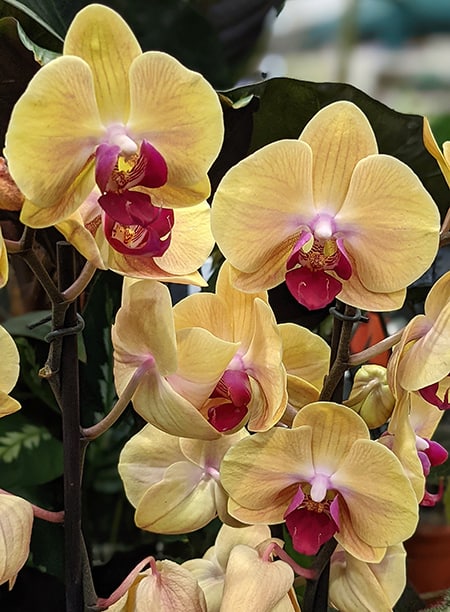 Open flowers on a new spike which will look beautiful until the last flower falls.

With proper care your plant will do the hard work and keep performing for years. Hopefully we've fully answered what to do with orchids after they bloom, but if you have any further questions drop them below or on our YouTube video.